Today, we have part three of my critique of Puyo Puyo Tetris’s story mode. There are a lot of scenes in this game, many of them with shaky writing in it. I will cover some of the scenes that stand out more, so I do not have to cover dozens of episodes for this one game alone. After this article, I will begin to be more selective about which scenes to show in my critique of this game’s story. The episodes shown will still be in the order they are found in story, but I will skip some scenes that are less noteworthy.

Of course, there will be SPOILERS throughout this series of articles, so be sure to check out my other works if you want to play this game before reading. Now, without further ado, let’s take a look at the next scene.

The story so far:

After Ringo and friends get warped to the SS Tetra, she meets the ship’s captain, Tee, who introduces her to Tetris. The two set off to find Ringo’s friends who are most likely on this star ship. 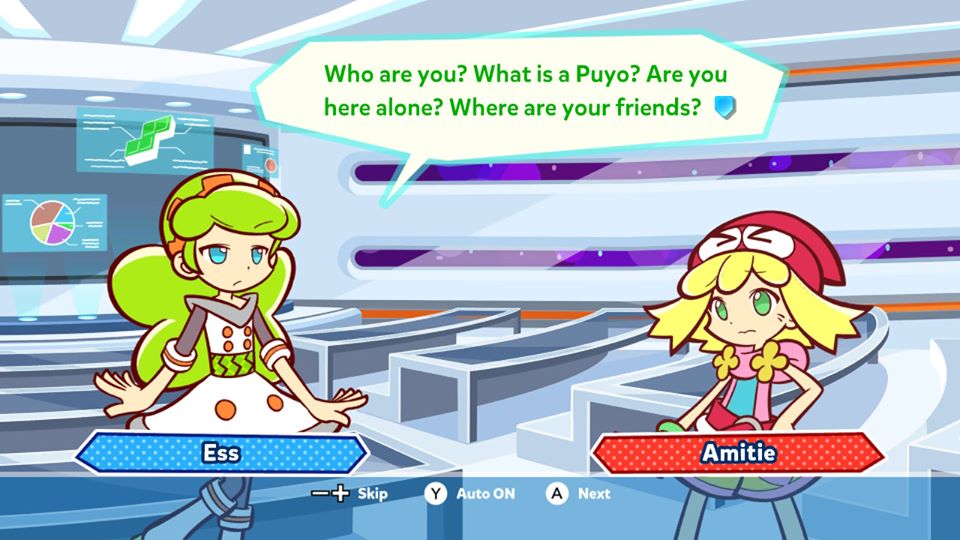 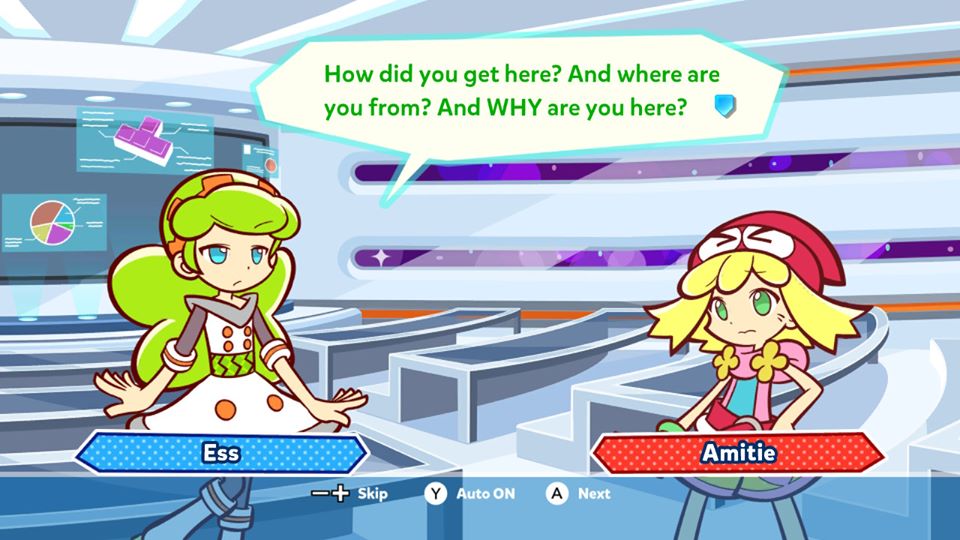 These are all good questions (except for the last one). Earlier in the scene, though, Ess claimed it was a simple question…but she ended up asking eight questions. It should be noted that she asks if Amitie is alone, but then asks where are her friends. So is Ess aware of Amitie’s friends or not? I’m assuming they argued over this before the scene starts, so Ess has some idea of what is happening.

Well, we have the playing puyo puyo causing a warp being used again. Also, this is the first we are hearing of Amitie being a magician, which might explain how the puyo warping is a thing. Still, to claim it is magic and can get away with anything isn’t very professional writing, and may only work in a good comedy sketch. In my opinion, this is either a bad comedy sketch, or a series of scenes that are unintentionally bad, so the “it’s magic so it can do anything” bit doesn’t really work here. 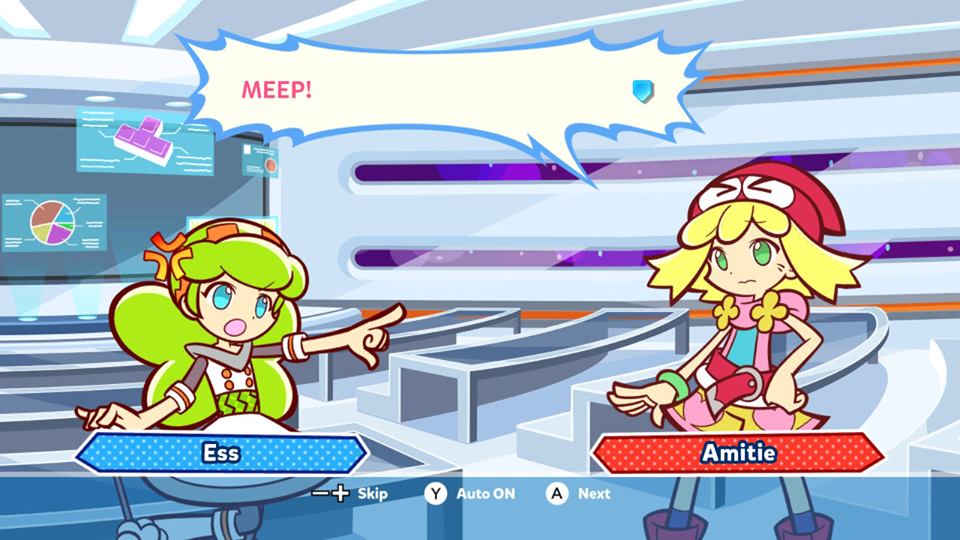 Well, at least someone thinks this is all nonsense! If the characters could “smack someone with a tetrimino”, then it would make sense to call tetris matches a “battle”. It still is pretty clear that isn’t happening during game play, though. I found the “meep” an amusing reaction here. While not the worst sound to make in this situation, “meep” is rarely used in any form of writing (except maybe in a road runner cartoon, though it is used in a different way).

Well, Ess does seem to be a handful. I think the word “abusive” is a little strong here, considering how bad abuse can be in real life… 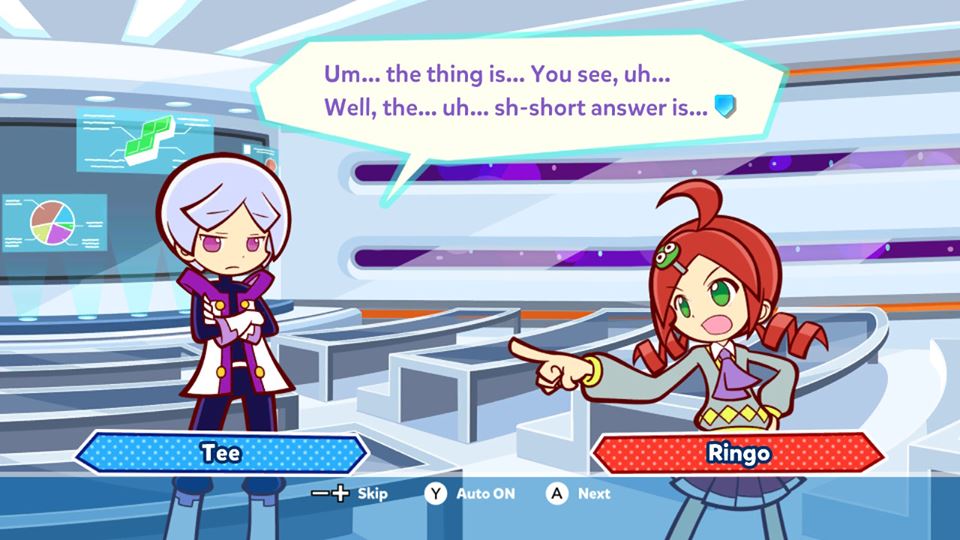 This story makes a lot of good, self aware points, only to contradict them, or to make them meaningless. Shouldn’t the captain have some authority here?

Okay, they used a more appropriate term for unfamiliar clothes…

And now they make it wildly inappropriate by calling Tee’s spacesuit a “ridiculously tight jumpsuit”. Jeez, I think it might be a little creepy complimenting a member of the opposite sex on wearing such an outfit, at least if they are calling it that! They also just met too!

And if you have been keeping up with these articles, I probably don’t need to add more to what is consistently wrong with this writing. Most obvious here is how little sense the story is making so far, and I’m pretty sure it doesn’t get much better, at least concerning the research I have done so far.

From here on out, the next few episodes of this case study will skip some scenes, so I don’t have to write 50 episodes. I will emphasize the more noteworthy and plot relevant portions of Puyo Puyo Tetris’s story mode, so that you aren’t lost, and to show what this game does right or wrong in terms of writing.

And that was part 3 of Puyo Puyo Tetris’s story mode. While I will skip some scenes in the next several episodes, if you would like me to fill in the gaps, or have other game suggestions, let me know in the comments below! If you like this content, be sure to give it a like. And to stay up to date on everything That’s All Games has to say, you can follow this blog via email. Until next time, have fun gaming!