Today I will continue my critique of Puyo Puyo Tetris’ story mode. Needless to say, there will be SPOILERS throughout, as I will cover this game’s story in great detail. I have been skipping some scenes in the process, if only to finish this project in a reasonable amount of time. The crucial scenes aren’t removed from my analysis, and I will post recaps at the beginning of each article, so you have some idea of where I left off. So, let’s begin!

In the previous scene, the SS Tetra was about to crash land on a nearby planet. This scene starts with the aftermath of that incident. 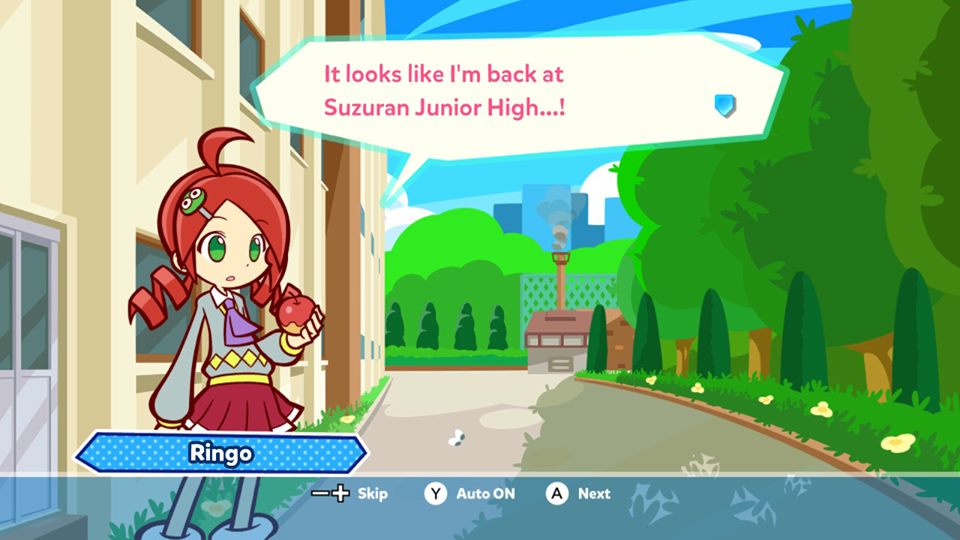 This is a weird start. First, Ringo remarks that they are alive. She wouldn’t be able to say that if she wasn’t, obviously. Next we learn the name of Ringo’s school, which I’m surprised wasn’t mentioned in the opening scene. 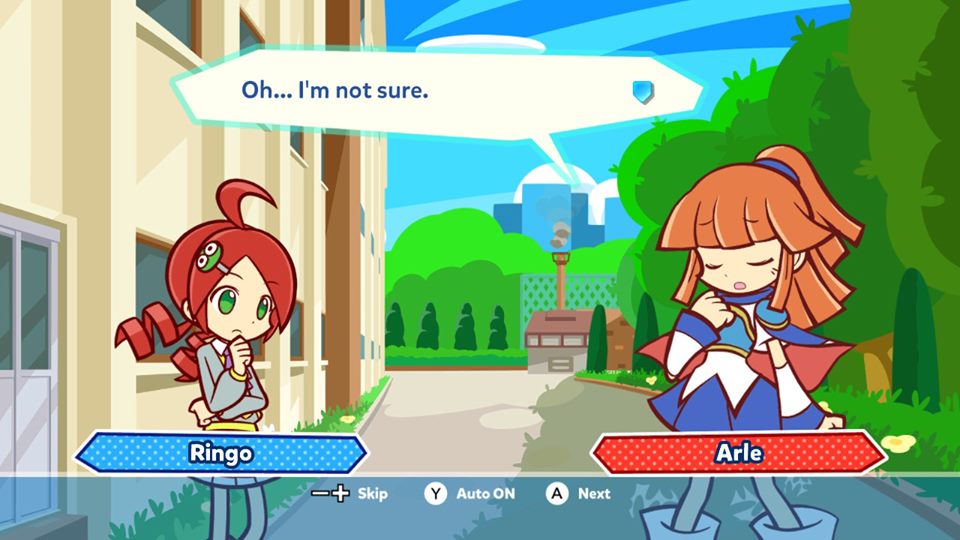 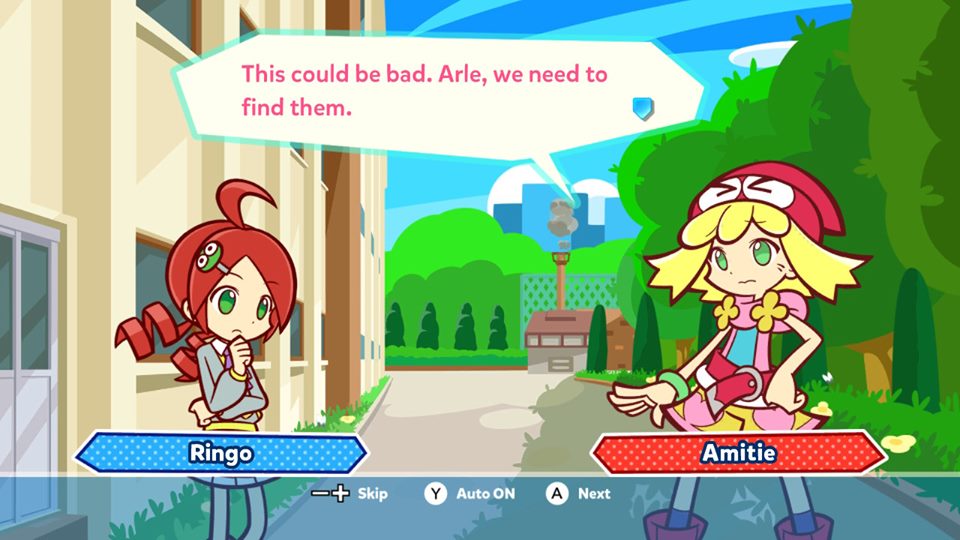 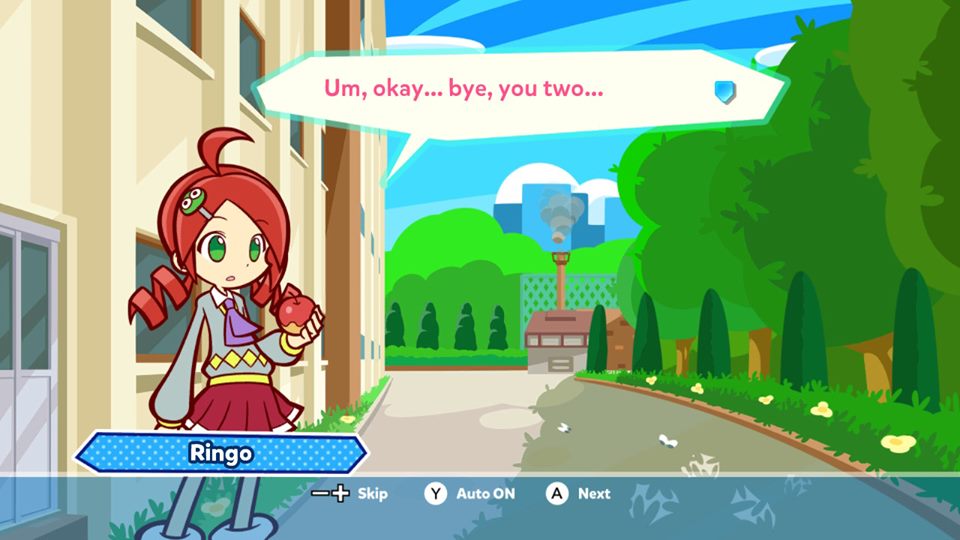 Next, the characters establish that the other characters are safe, but lost. How much further from the crash could they have been? Did everyone wake up and wander off at different times? Then Amitie and Arle decide to wander off for no reason, after actively acknowledging that they should find the crew, leaving Ringo to do that by herself. This is only the first scene of Act 2, and everyone’s priorities are way off.

Okay, this Maguro guy is talking weird. Usually, a star symbol isn’t used in the English language to signal a specific tone of voice. If it wasn’t for the voice acting, I might not know how he is saying his lines, which come across as mildly flirty and a little sing-songy, from my perspective. A music note symbol would work better, or if he is being flirty, a heart symbol.

Not much to add to this here, it is one of the few sets of lines that makes sense. 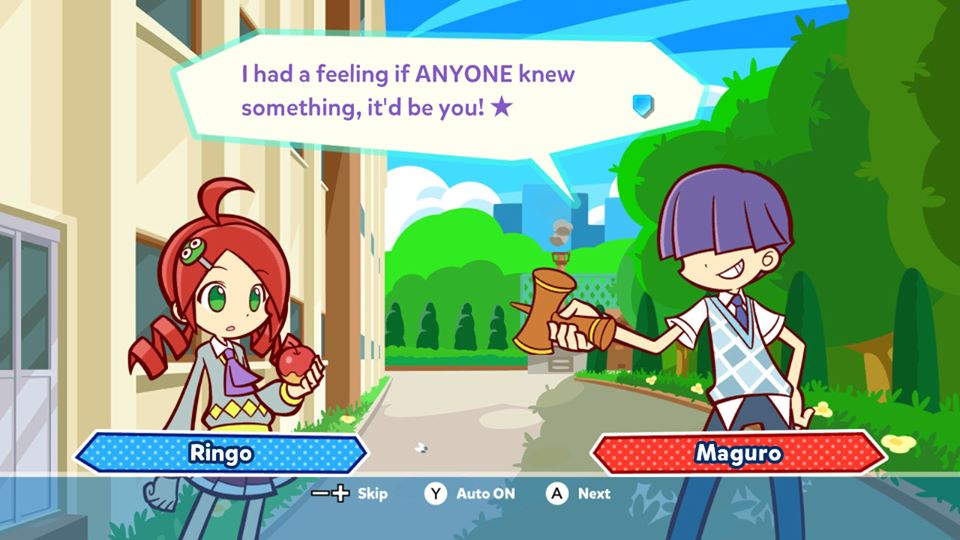 Here’s the “super-tight clothes” thing again. Again, it is a “super-awkward” choice of words here, and doesn’t add any (appropriate) humor or style to a kid’s game. This sort of thing must happen to Ringo a lot if the general student body suspects her to be part of a strange turn of events. Also, a spaceship crashing on a school roof should have destroyed most or all of the school. 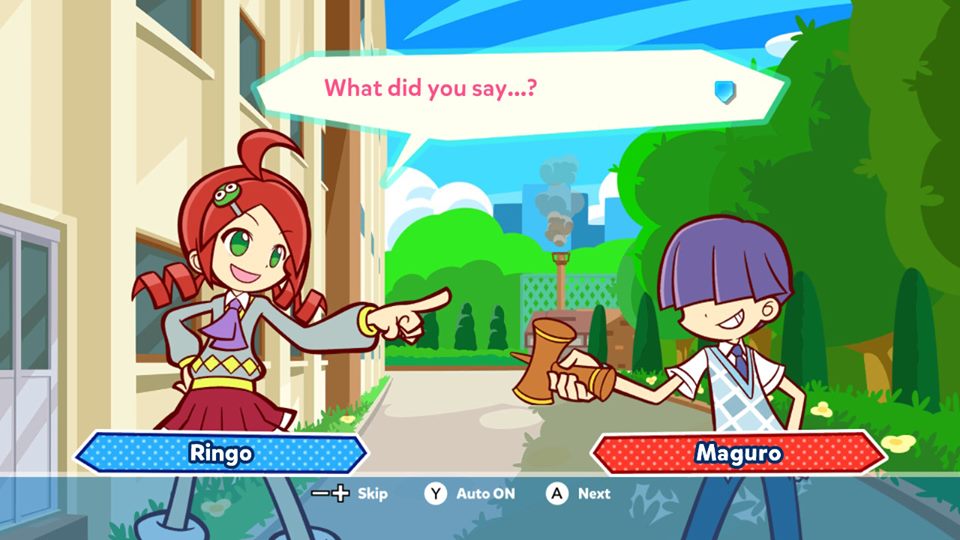 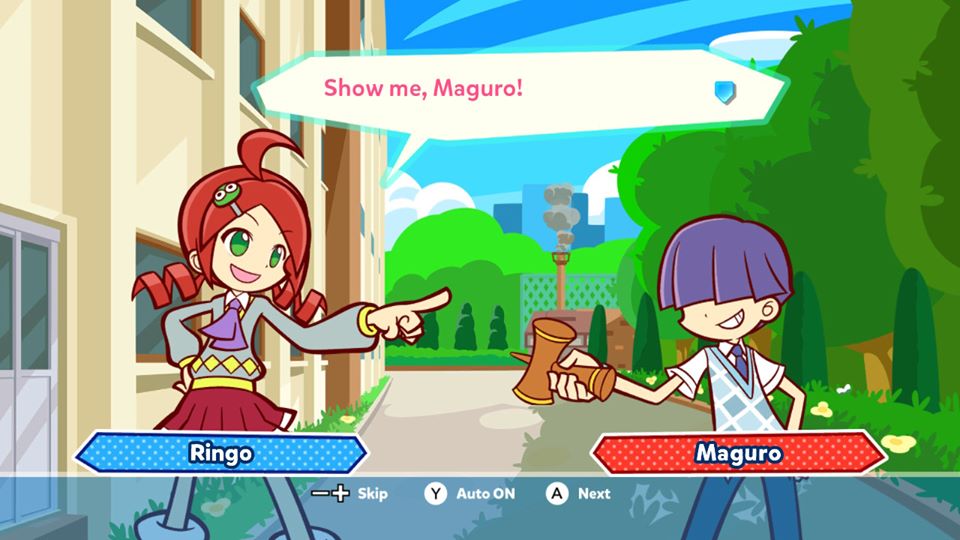 This series of lines is also pretty ordinary, considering the circumstances. At least they are getting this right.

The second line of this portion of the scene is under detailed. As for the rest of it, the character’s reactions are relatively normal. I am amazed that they aren’t noticeably hurt after being in a spaceship crash, or that they aren’t in the wreckage when they landed. 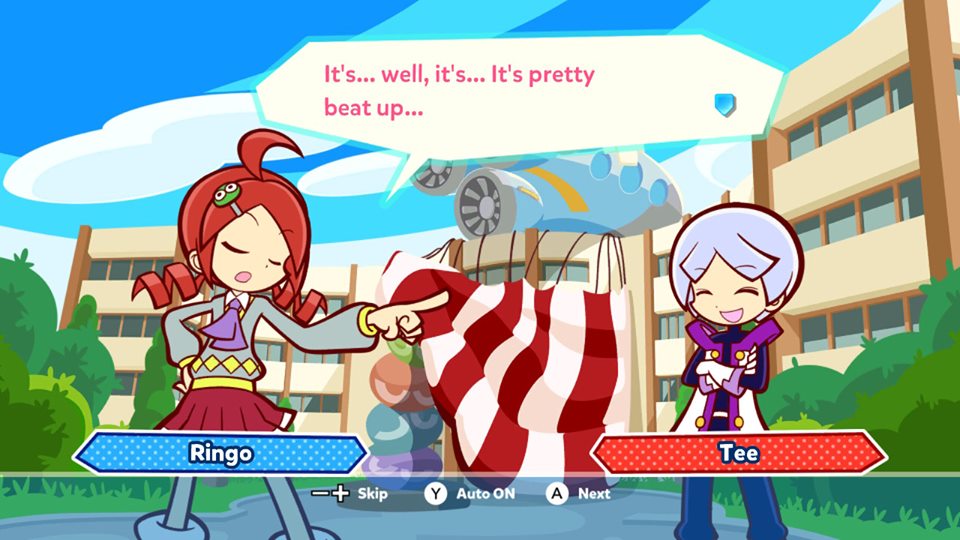 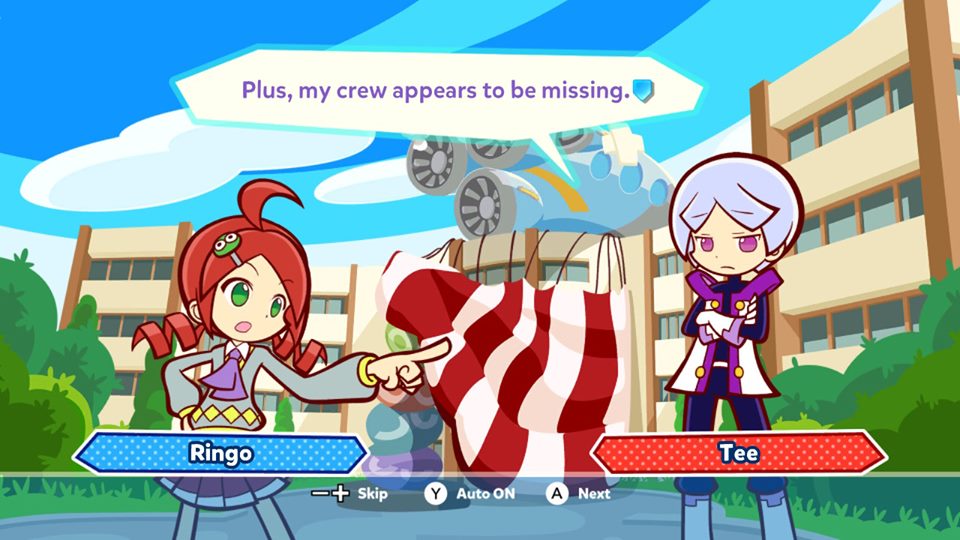 After a bit of stumbling, these characters repeat the obvious… 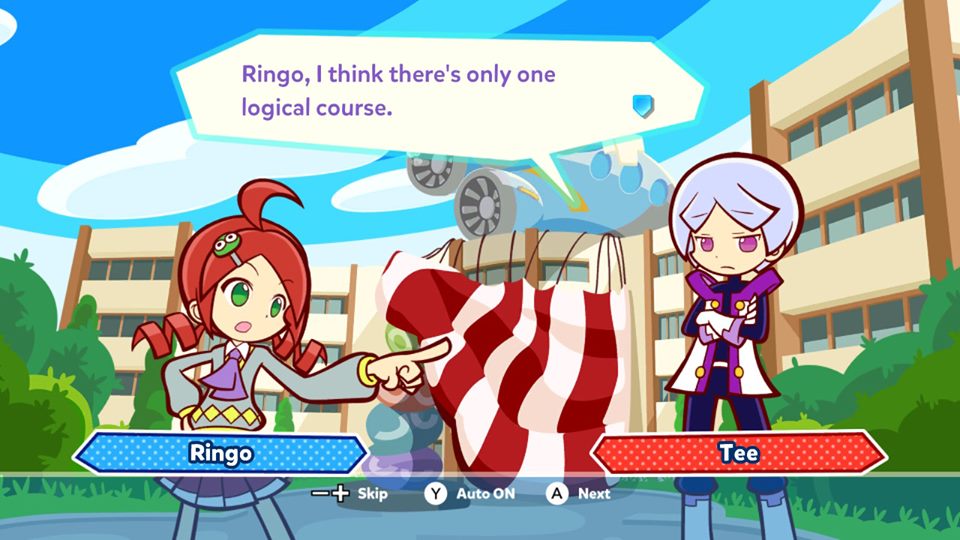 Okay, so something important has come up. I’m not sure why Ringo says “absotively” which is not a real word in the English language. The brief amount of humor here gets lost. Let’s look at what happens next, though. 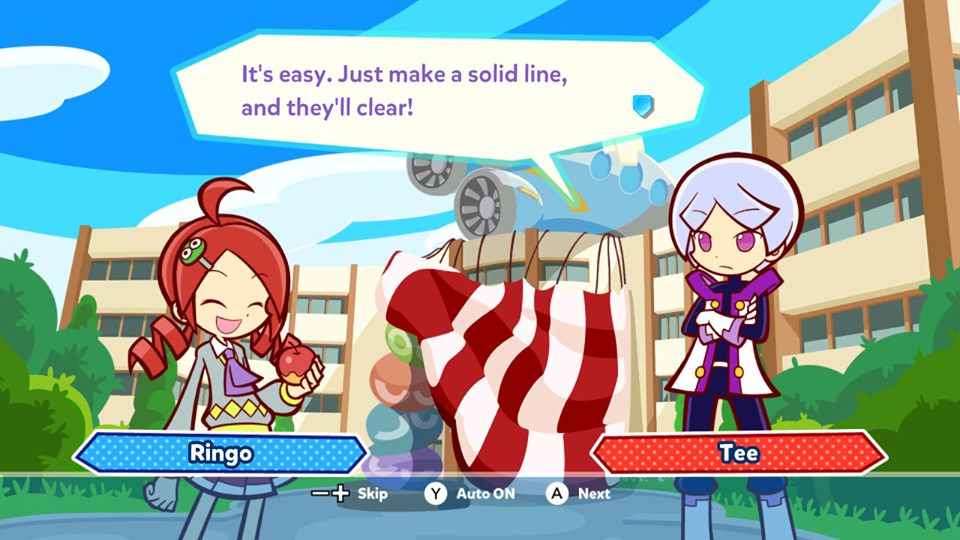 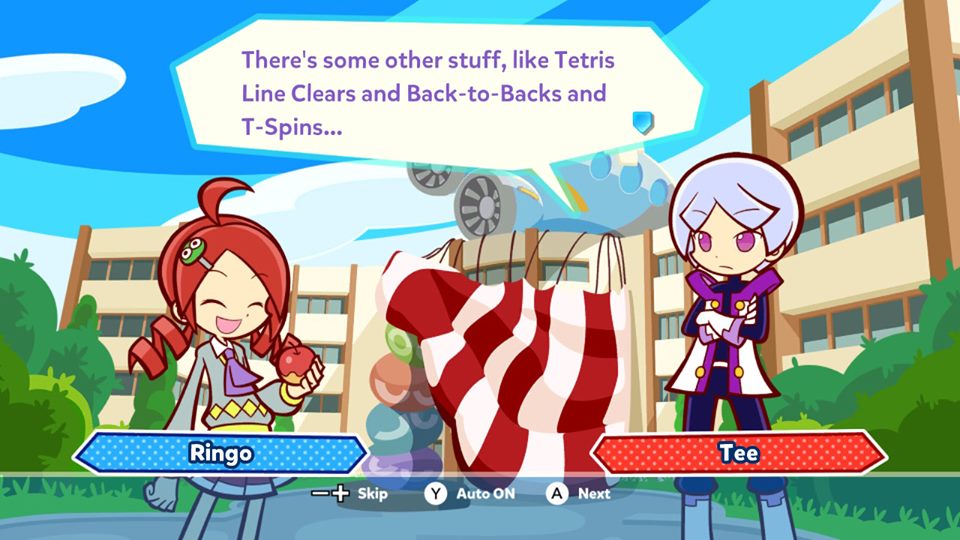 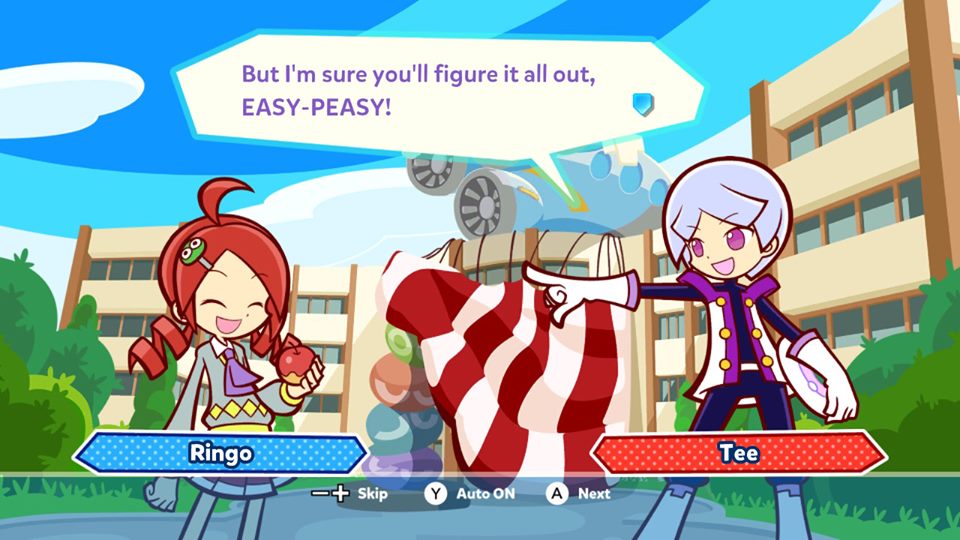 So blowing off steam by playing Tetris is very important? I mean, I guess so. While Tee’s teaching skills start off okay, he then washes over some advanced techniques that even I, a long time Tetris player struggle with. It should be noted that it takes all this time to get to the game play portion, which is a little too long… 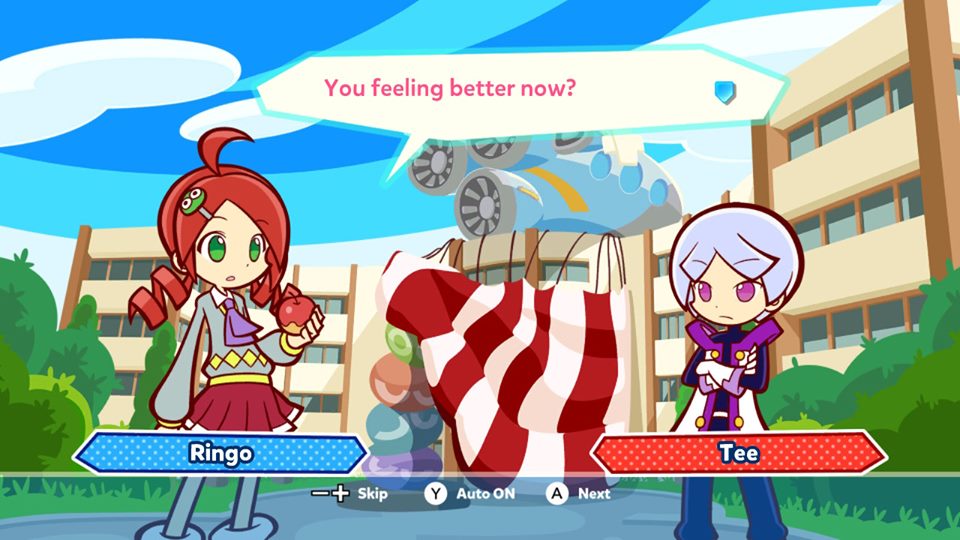 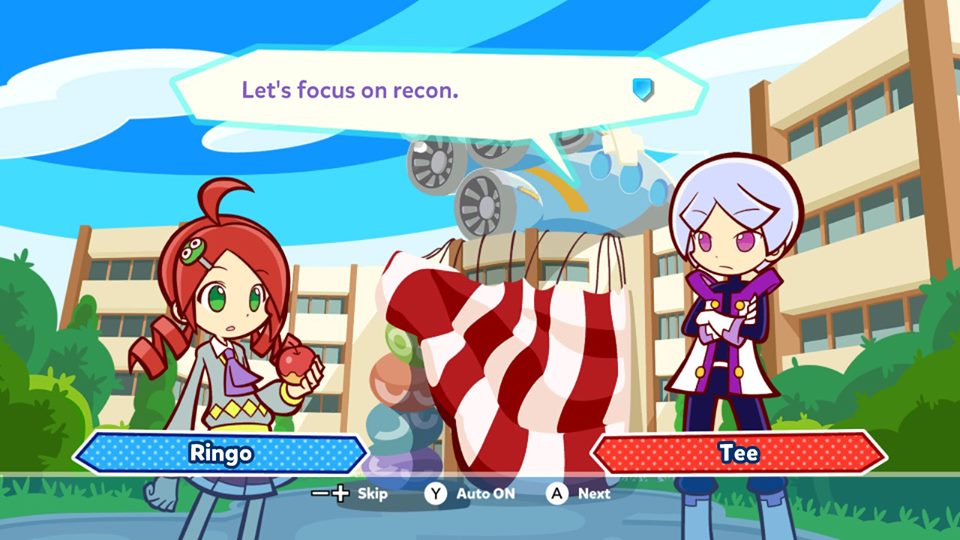 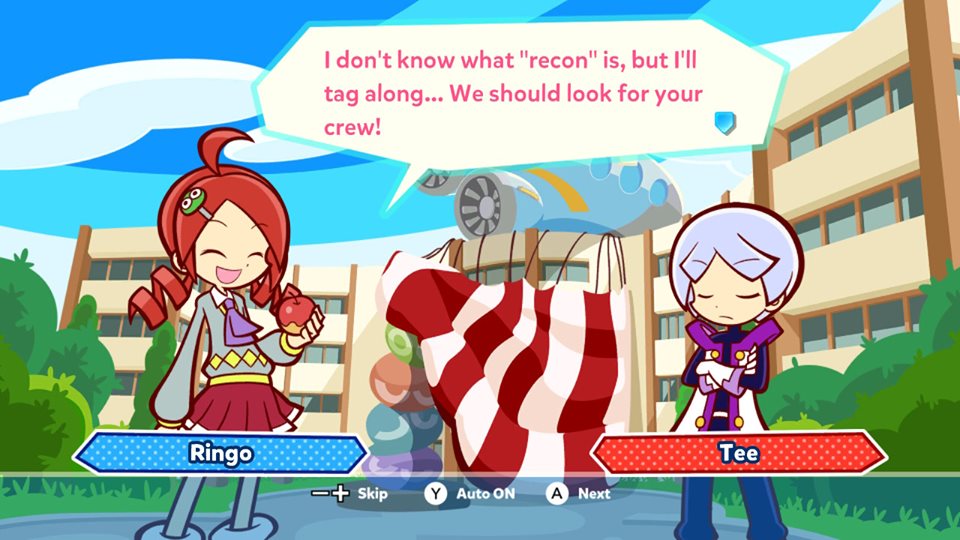 Okay, so after playing Tetris, Tee finally discusses finding his crew. There’s also a lame joke about Ringo not knowing what “recon” is…I guess she’s young enough not to have heard the word. Tee obviously knows it due to his line of work, but he doesn’t look much older. 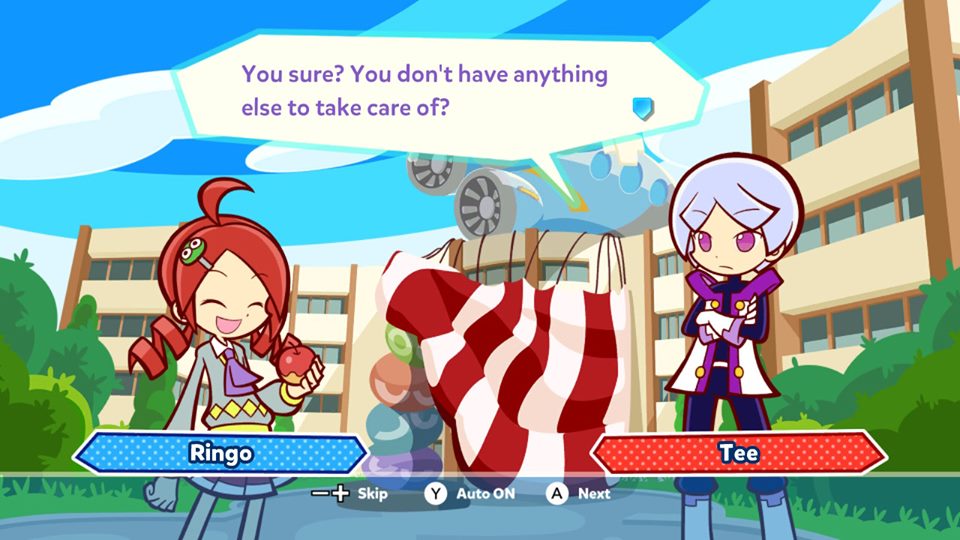 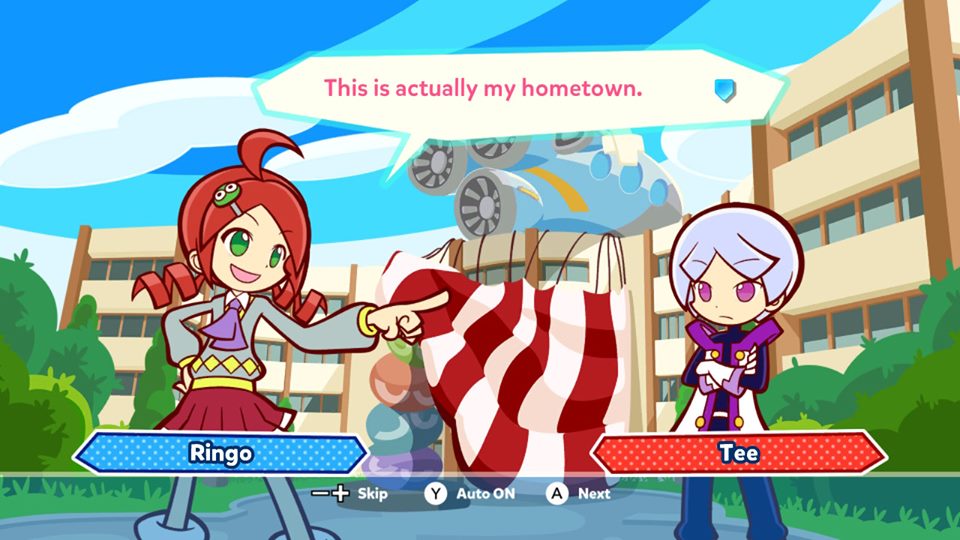 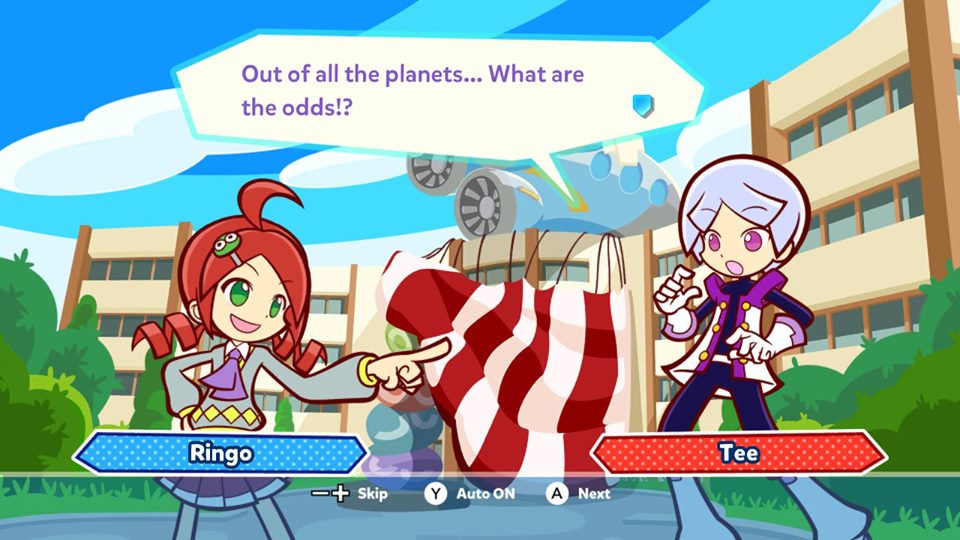 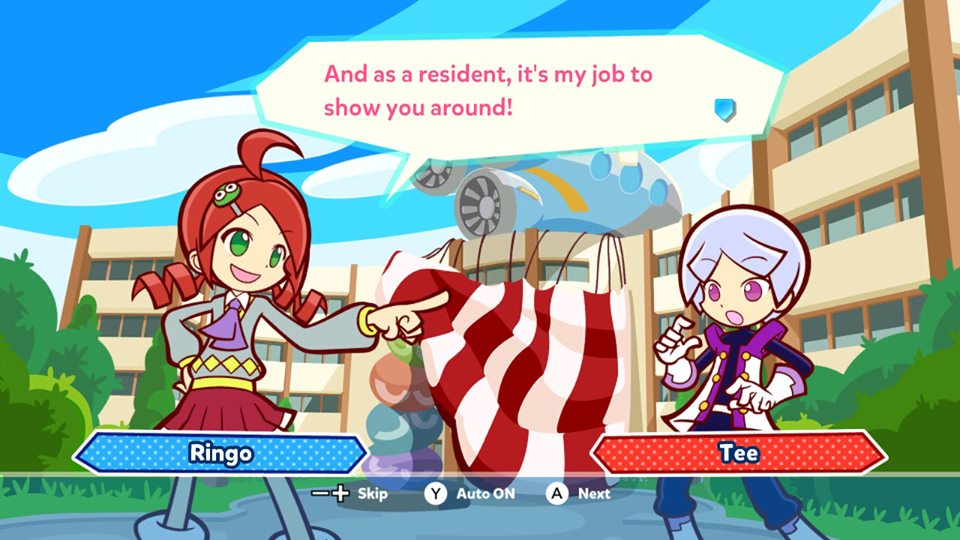 I have a few problems with the above. First off, if Ringo is not on her home planet, what else would she have to take care of? Next, what are the odds? This sort of plot twist is obviously here for convenience, and they overused coincidences already in this story. Finally, would it be considered gentlemanly to bring a girl home by crash landing into her school?

What we have here is just the surface of what is wrong with Puyo Puyo Tetris’s story mode. More will be coming, with a full analysis and recommendations at the very end of this case study. That may be a ways off, but stay tuned till then!

This was part 5 of my case study of Puyo Puyo Tetris’s story mode. There is plenty more to cover, so look forward to the next episode! What about you, my readers? Did you find anything else that was off in this scene? Something redeeming I didn’t find? Let me know in the comments below! If you enjoyed this article, be sure to give it a like. Be sure to share this article on social media, and you can subscribe via email to get notified when a new article is published on That’s All Games. Until next time, have fun gaming!