It is that time again to cover more of Puyo Puyo Tetris’s story mode. I’m in the final act of the game, and will not skip any scenes in this analysis till the end of the game. There are, of course, plenty of spoilers ahead. If that isn’t an issue, then read on!

Recap: Ringo, Tee, and friends have made it to the edge of the universe, and have met Ex, the keeper of dimensions. While the past two scenes introduce him, this one expands on the reality of the issue at hand.

So we now start to see why everything is happening the way it is. Ex isn’t being malicious, (despite what both the Dark Prince and Ecolo may have said in some previous scenes) he’s just lonely. It is a little unclear if he intentionally started the merging of dimensions, but the need to see other people started this scenario. Let’s see how the other characters take this news… 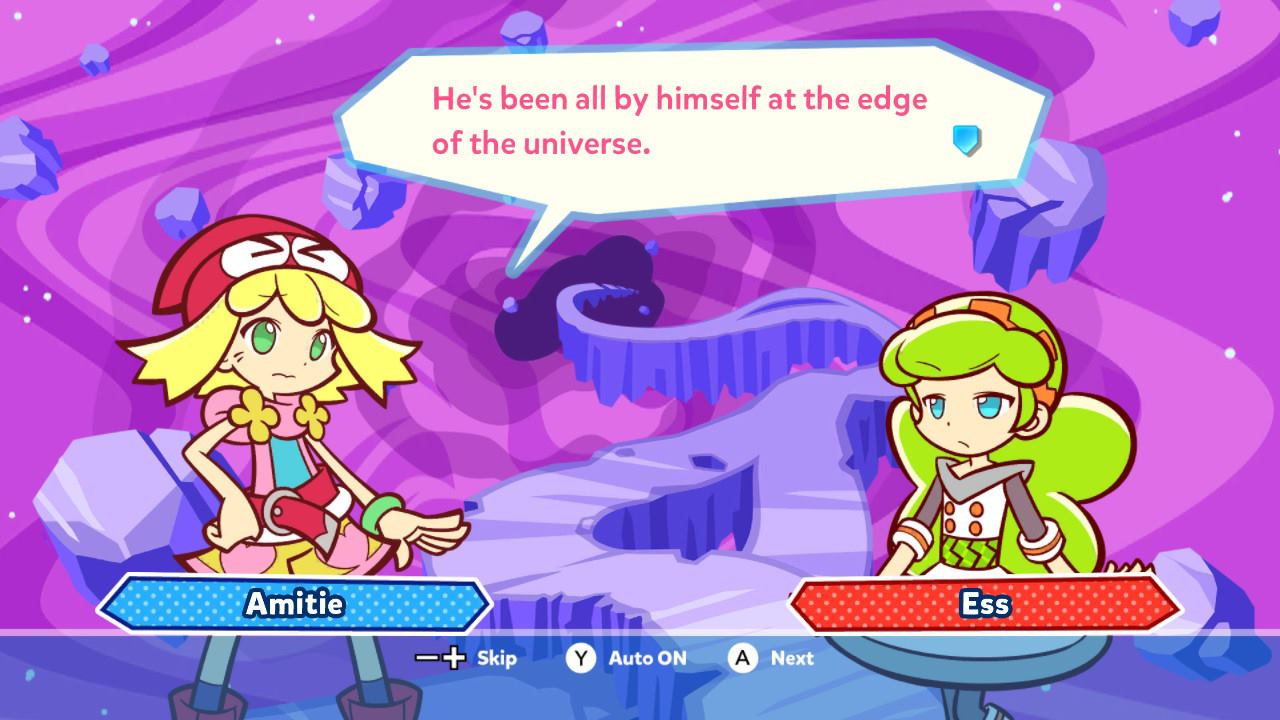 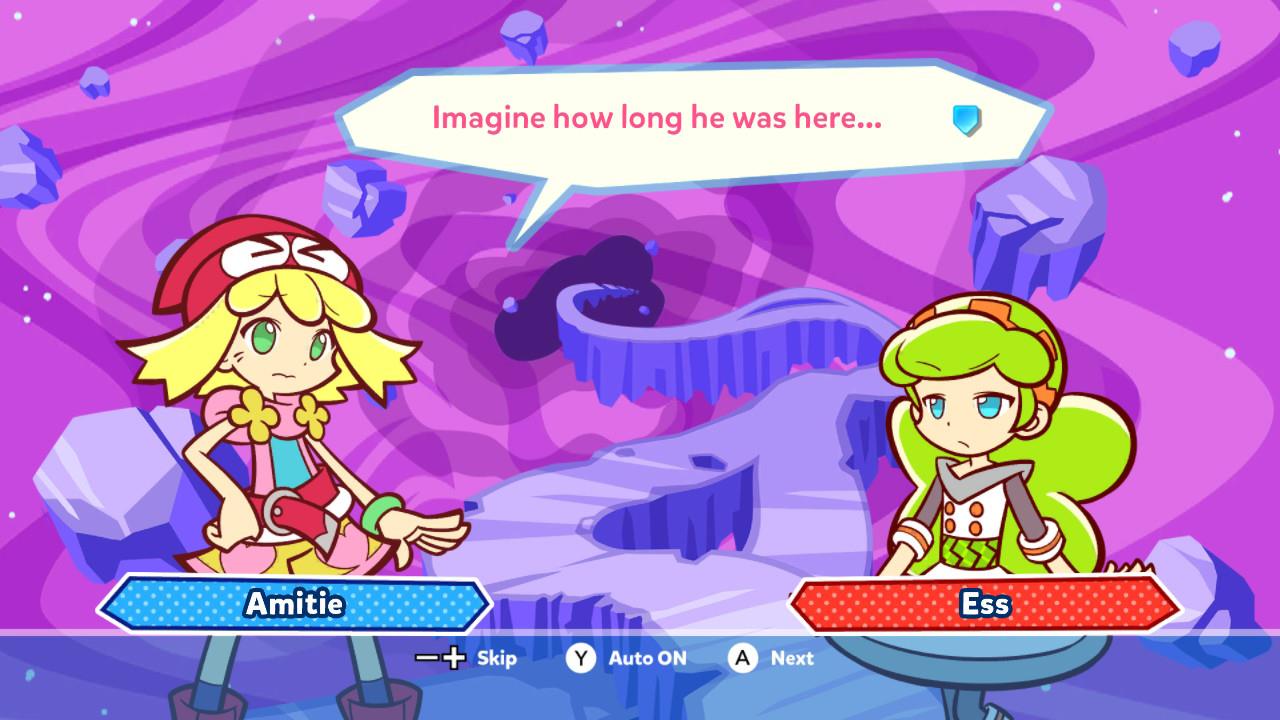 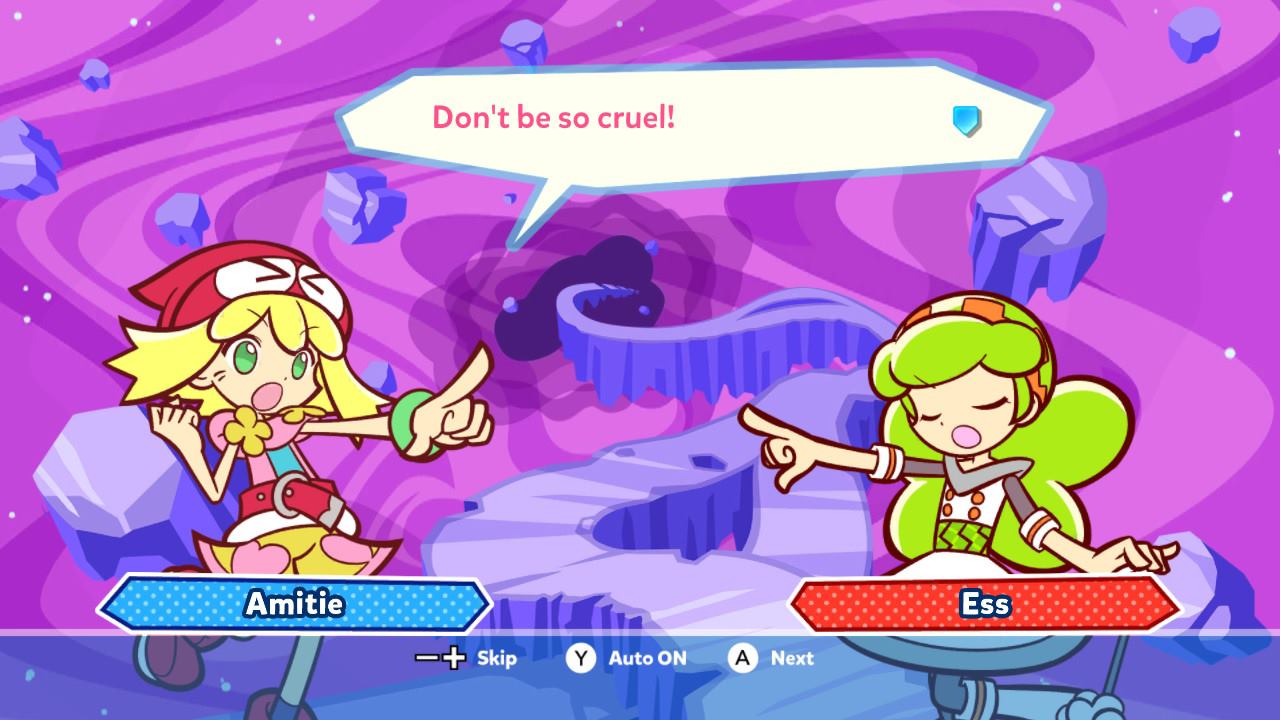 So this argument does raise the question of whether Ex was being selfish in seeking attention from other people. Obviously, Amitie feels sorry for the guy, while Ess thinks they are being used. Once I get through all these scenes, you’ll see that Ex is genuinely lonely. This turn of events is a sharp contrast to the tone of the rest of the game. While most of the story was wacky, chaotic, and attempts to be funny, this scene is more sad and mildly depressing. The more serious tone might not be what the story needed, but they have to explain everything in a manner that makes sense. Maybe I would have preferred a traditional showdown with a normal villain, as opposed to a bunch of sad revelations. Let’s see how this plays out. 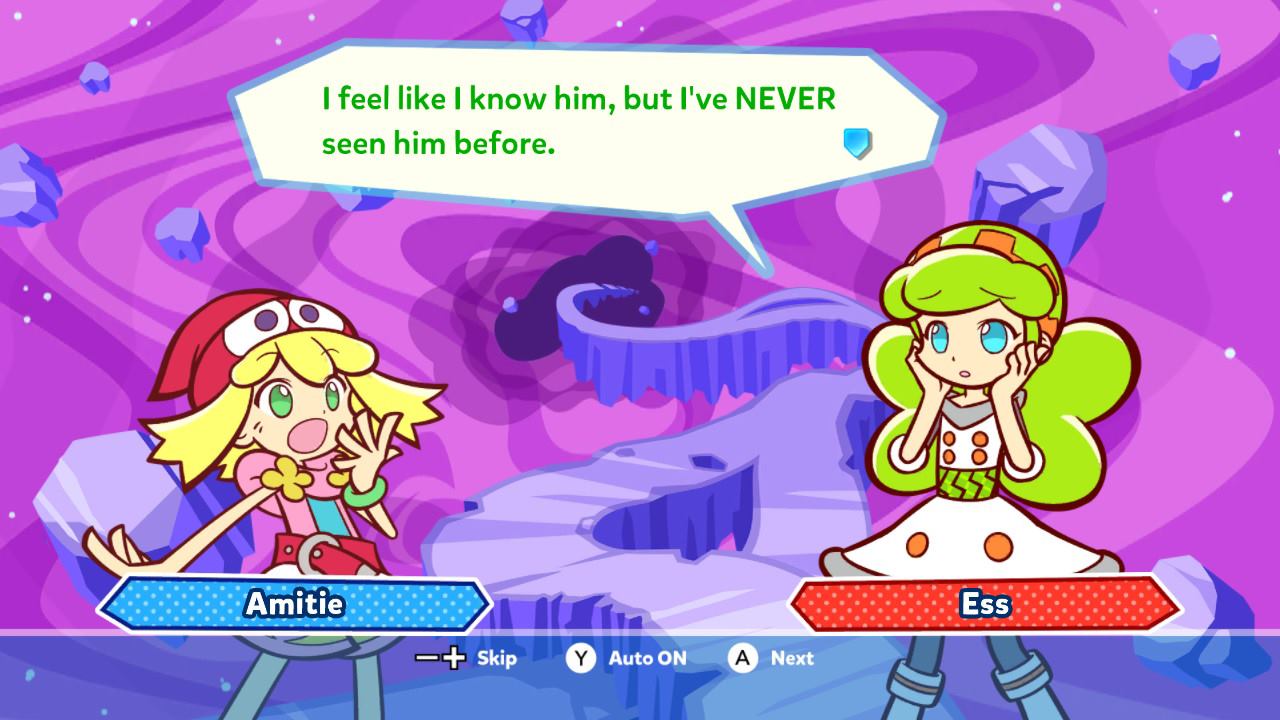 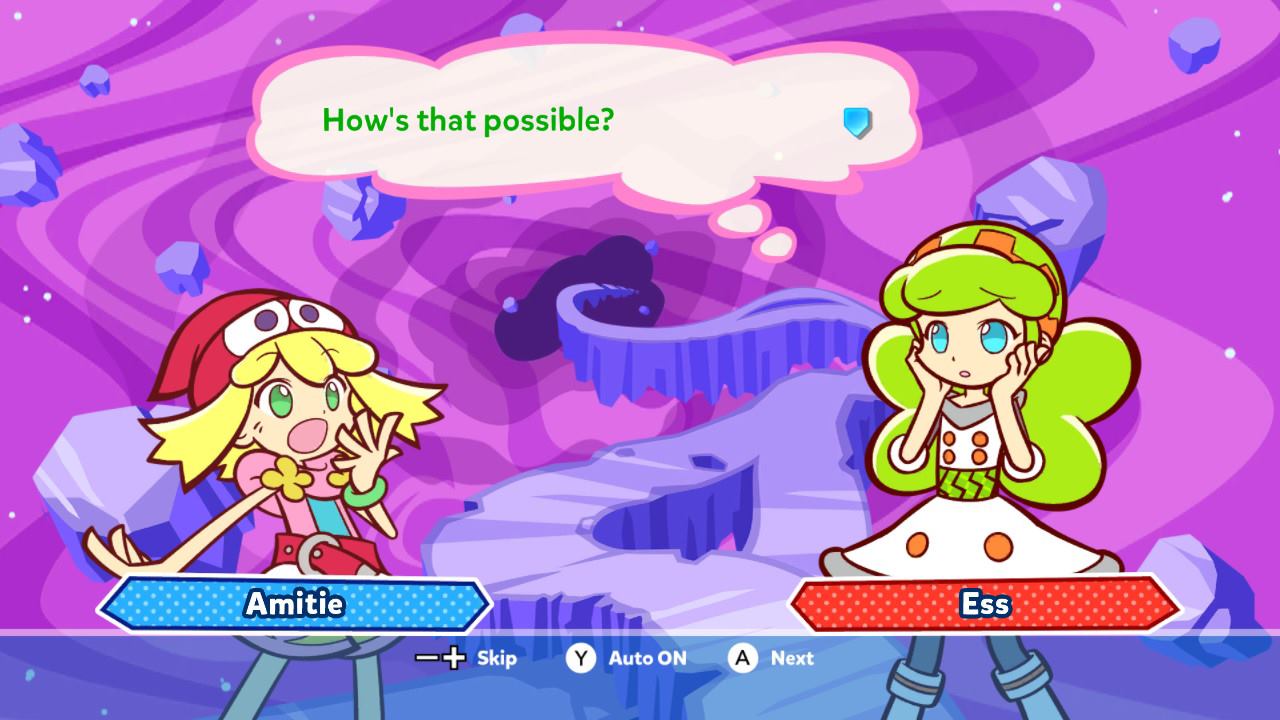 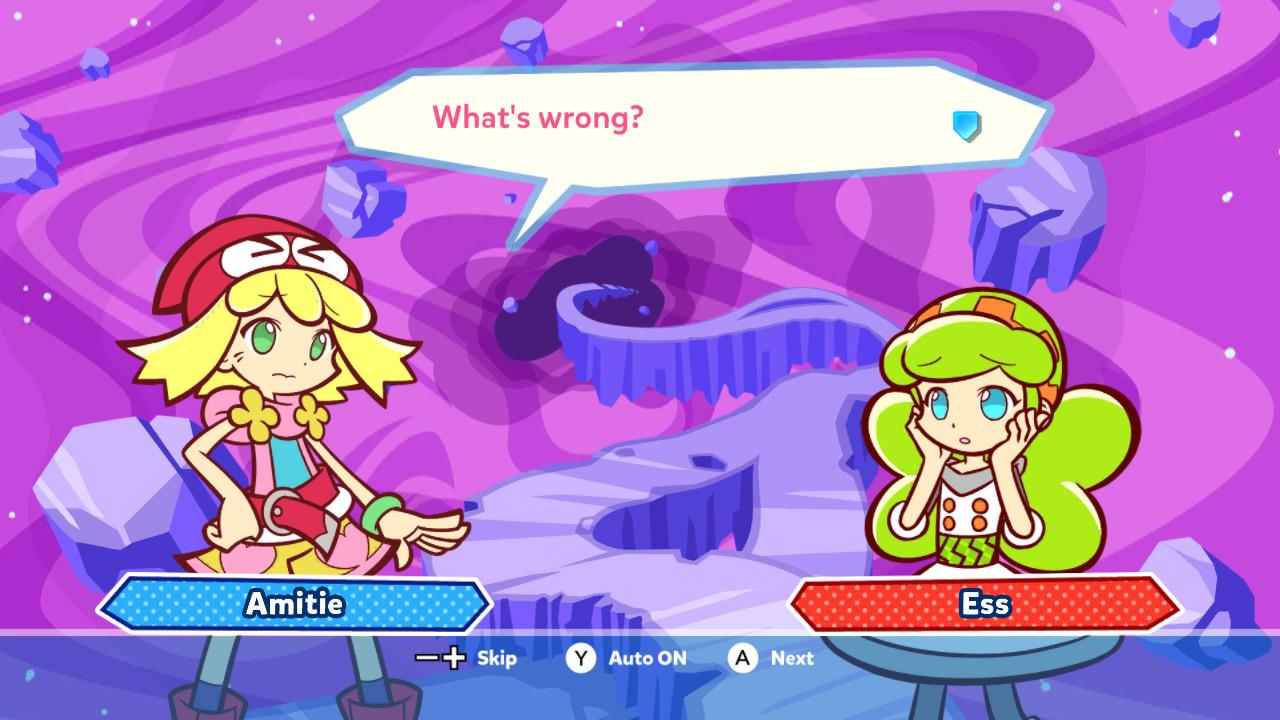 So it looks like Ess wasn’t paying attention in the previous scenes. Ex already explained that since he can travel between worlds, no one can remember him. This is why Ess seems to know him, but doesn’t at the same time. I guess that makes her crabby too. If I’m not mistaken, the game switches to gameplay here, though it is hard to tell by just looking at the dialogue. 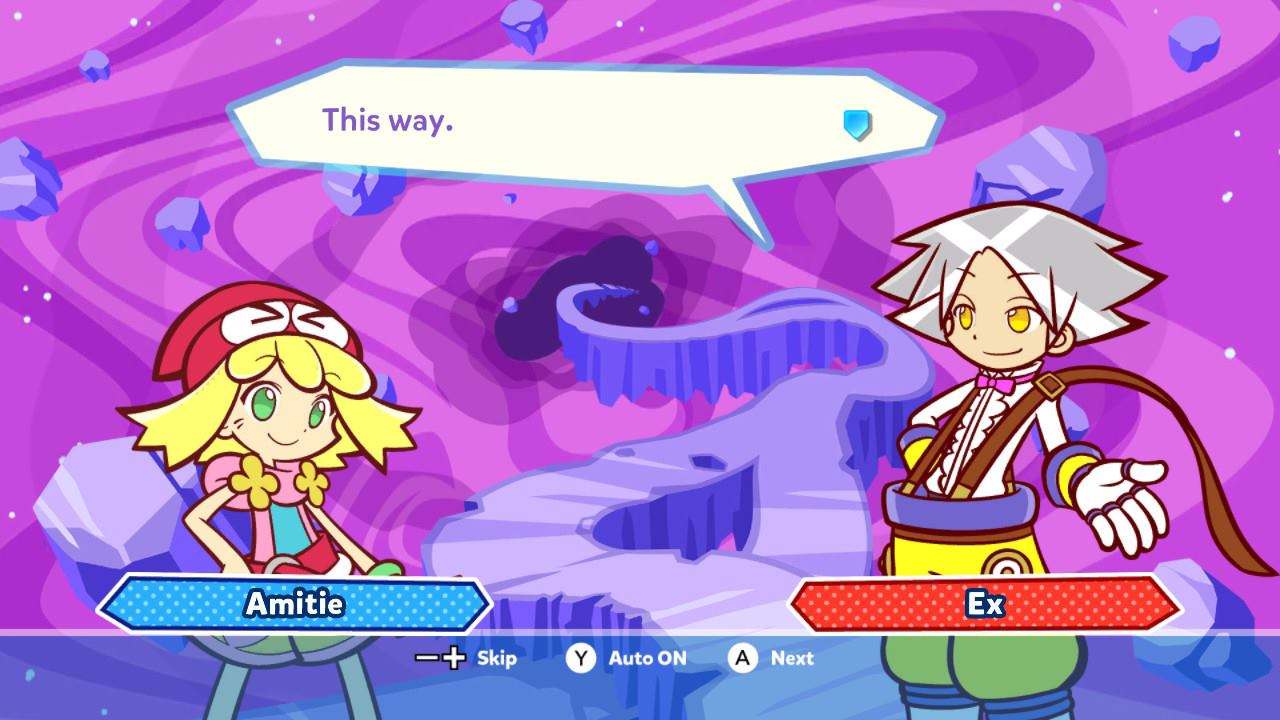 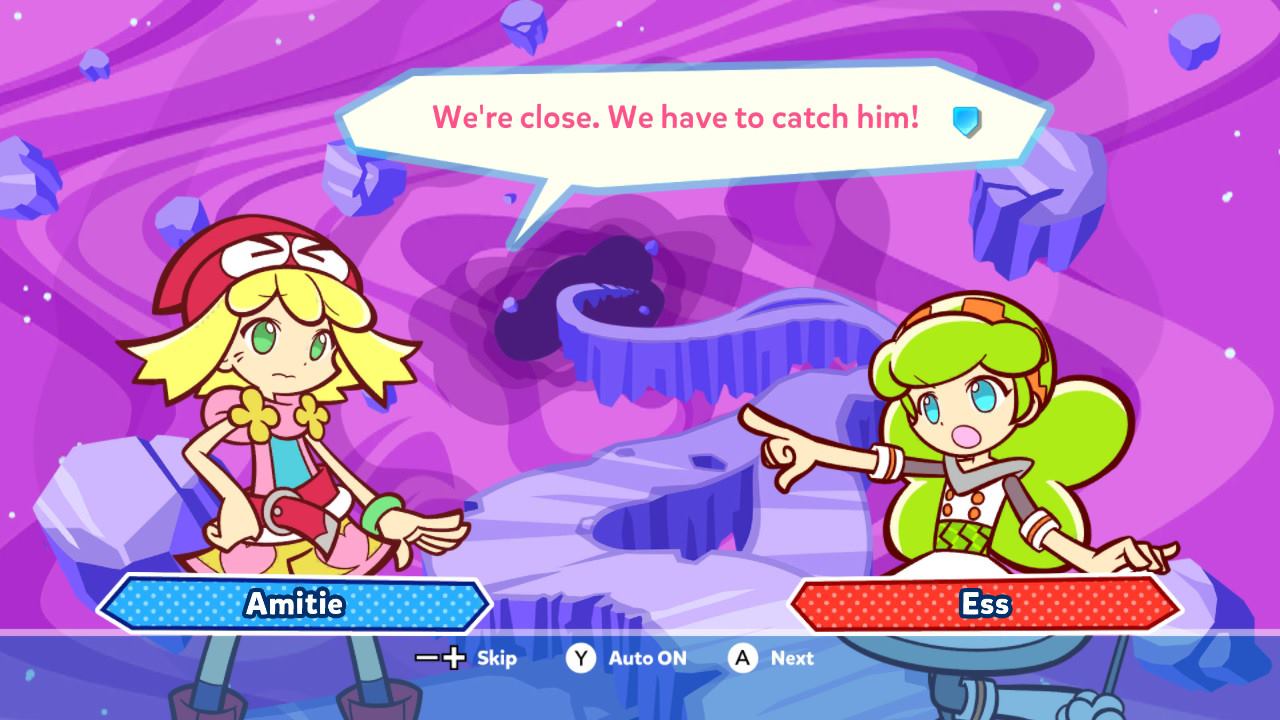 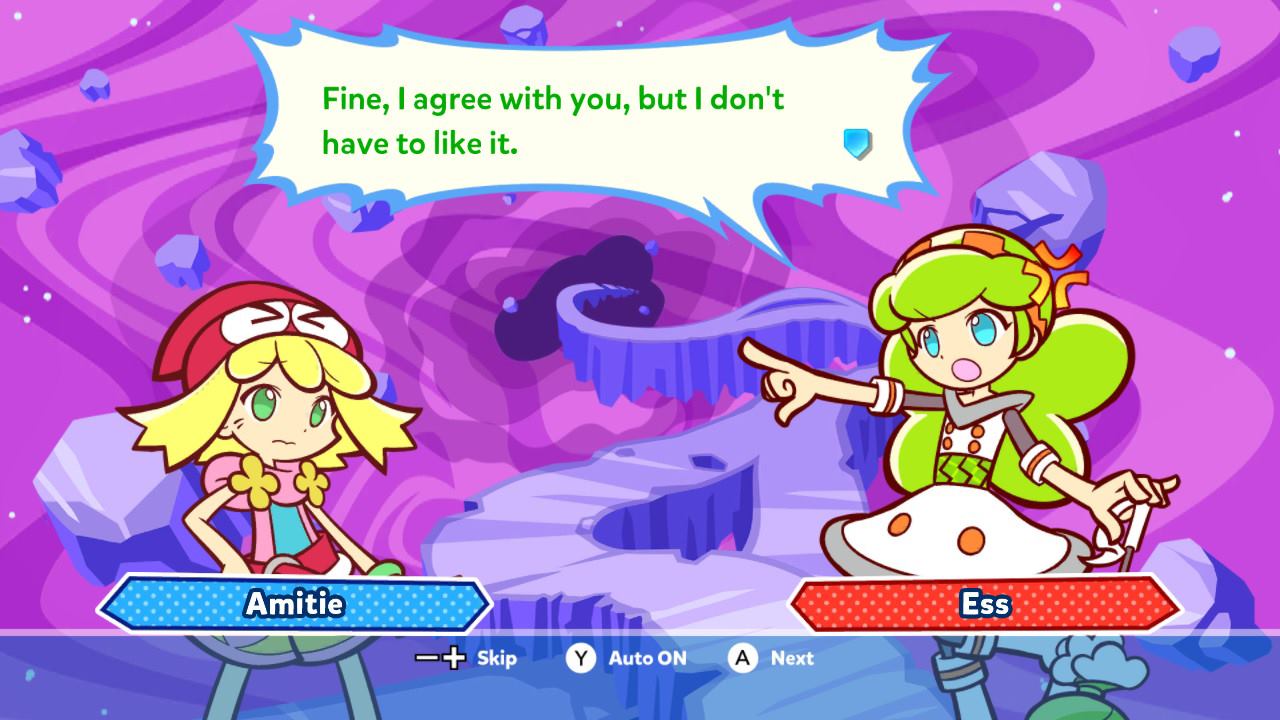 After completing the gameplay section, you get the above exchange. The writing here is trying to keep open the idea that Ex is manipulating the main characters, but he seems to be guiding them instead. Sometimes giving the reader doubts about what is happening can draw a reader in. This usually is best around mid-story though, and less effective near the end, but can make the ending exciting and want the reader to keep going. Considering how poorly written this game’s story is for the most part, this doesn’t help much. Also, this is the end of this scene. Again this scene ending is abrupt, an ongoing issue with this game. I am so close to finishing this game’s full story analysis, so stay tuned!

And that wraps up this episode of Puyo Puyo Tetris’s story analysis. What did you make of this scene? Are there any good or bad points I missed? Let me know in the comments below! If you enjoyed this case study, then click that like button and share on social media. To keep up with That’s All Games, you can subscribe via email or WordPress. Until next time, have fun gaming!