Today I am analyzing a late game scene from Puyo Puyo Tetris. This scene will contain some spoilers, so if you care about that then use the links above to browse my other content before you read this article. But with that said, let’s take a look at what this scene has to offer.

Recap: Tee just defeated the Keeper of Dimensions in a Tetris battle to help him rediscover his duties (never mind how that is supposed to make any sense). Oddly, the game isn’t over yet, as the scene begins:

Okay, this scene starts simple enough, but now there is a twist: 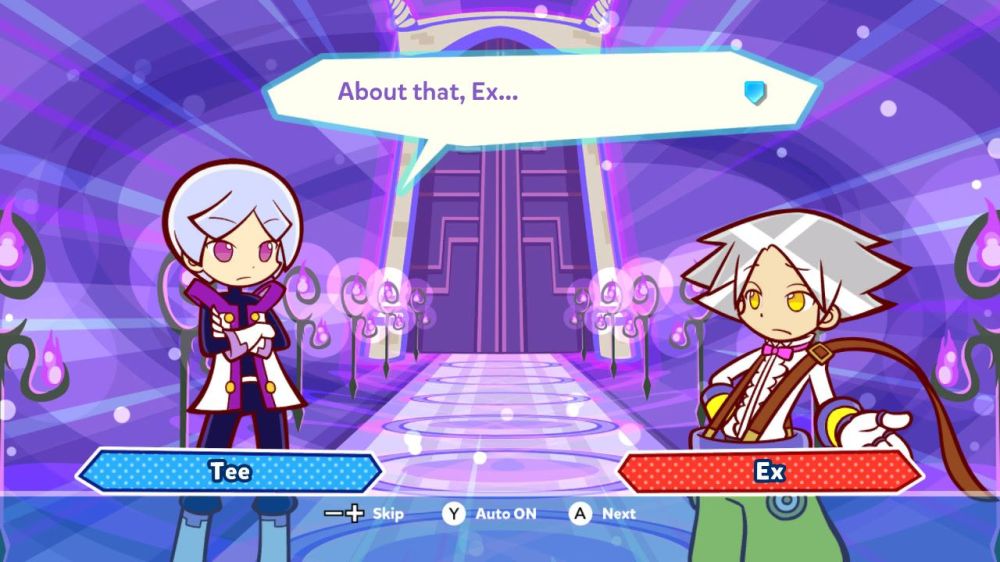 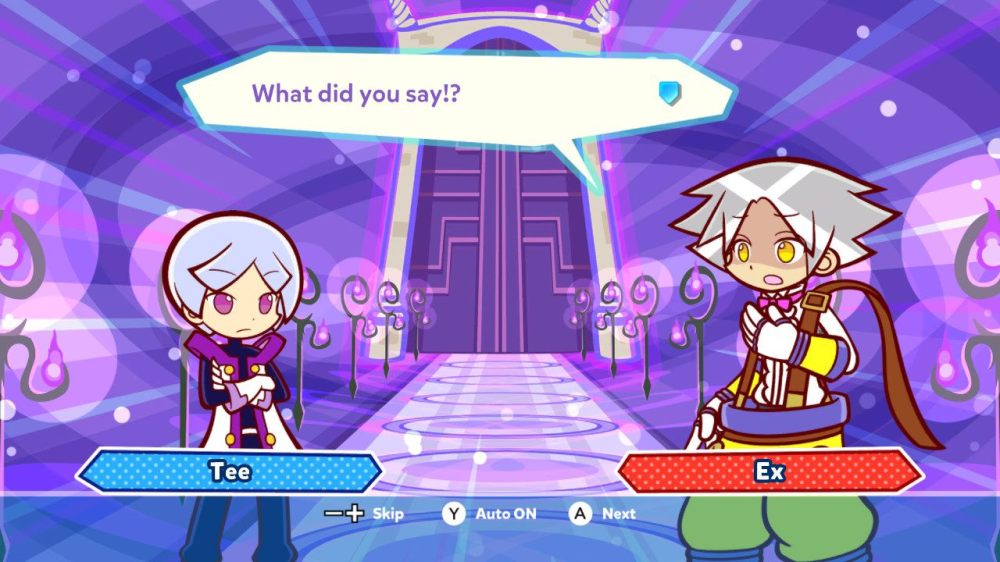 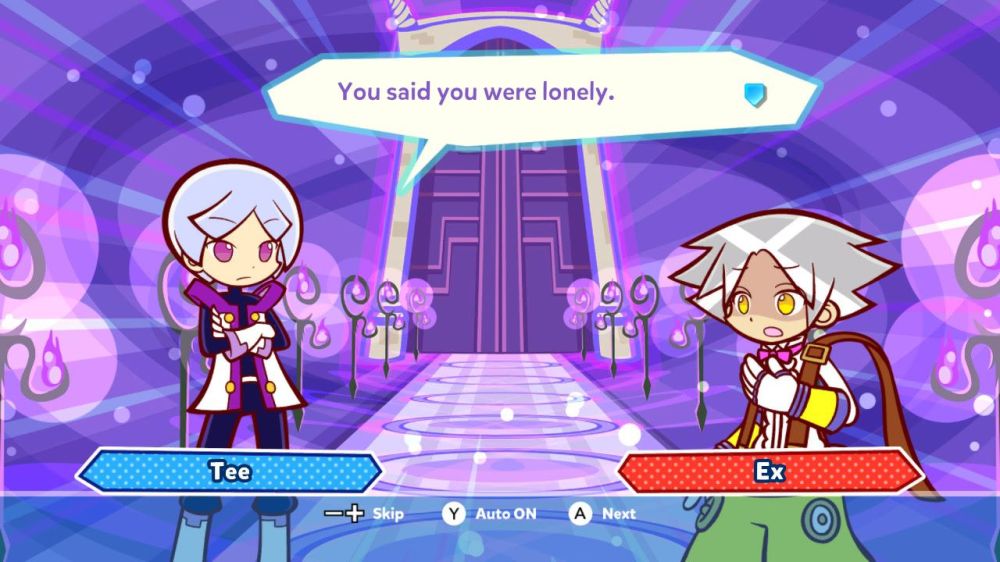 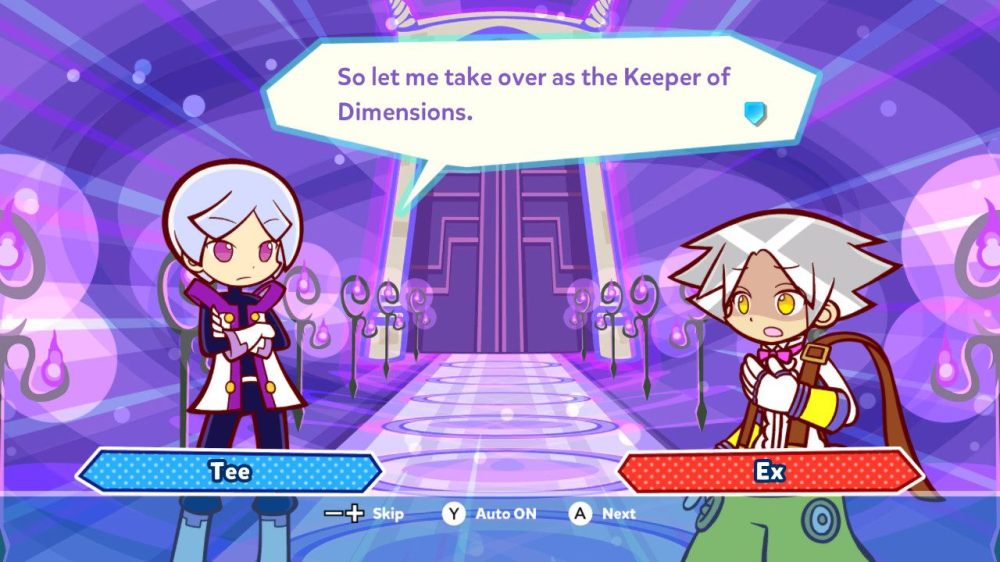 Okay, so this was why Tee was quiet in an earlier scene, he was planning to take the burden off of Ex’s shoulders, and incidentally, leave his friends. Let’s see how they react… 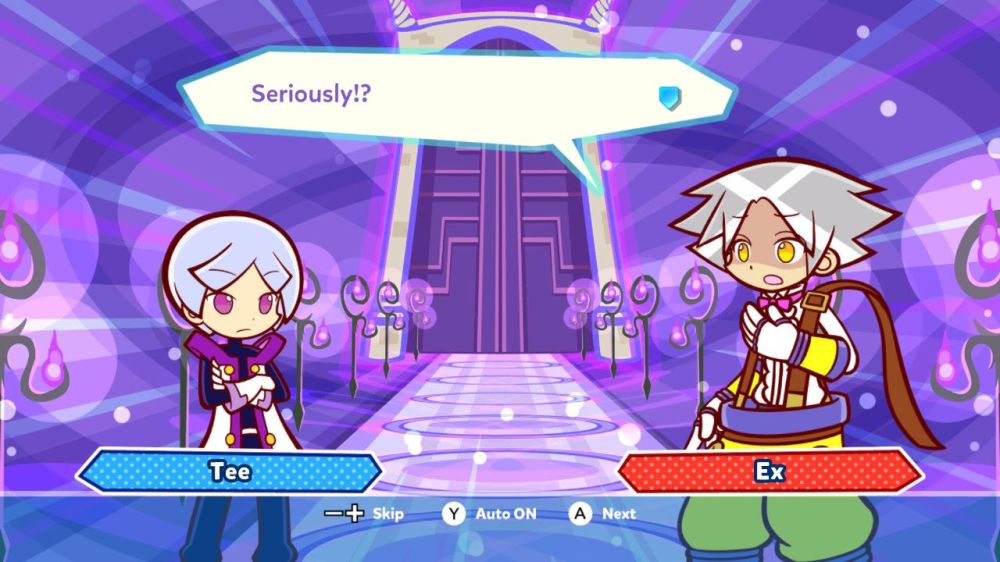 So I had to include this portion in my analysis. There’s an odd trick to comedy where repeating or setting up a joke occurs in threes. In this case, you have three characters say “Seriously!?” in a row, with the fourth one changing the pace. This is the way to write this kind of scene. One slight alternative is to have two characters say “seriously!?” in a row, and have the third one saying something different. It works about the same both ways, but it is unfortunate that many jokes in this game fall flat due to what is happening in the scenarios that Puyo Puyo Tetris throws at the player. As a side note, I have no idea why the trick of threes works, it just does. It might be a psychological thing, and I have no idea if anyone studied it thoroughly, but keep it in mind if you want to write comedic works.

This raises the question, does being the Tetris king lead to having the power to become keeper of dimensions? Ex did mention that he gained the ability to pass between dimensions while Tetris king, but did not note if that was an innate power, or something he gained from having the title. With it being so late in the story, there should be more answers than questions raised at this point. Oh, well, this story was mostly nonsense anyway, so it is hard to expect coherent writing at most points in this game. 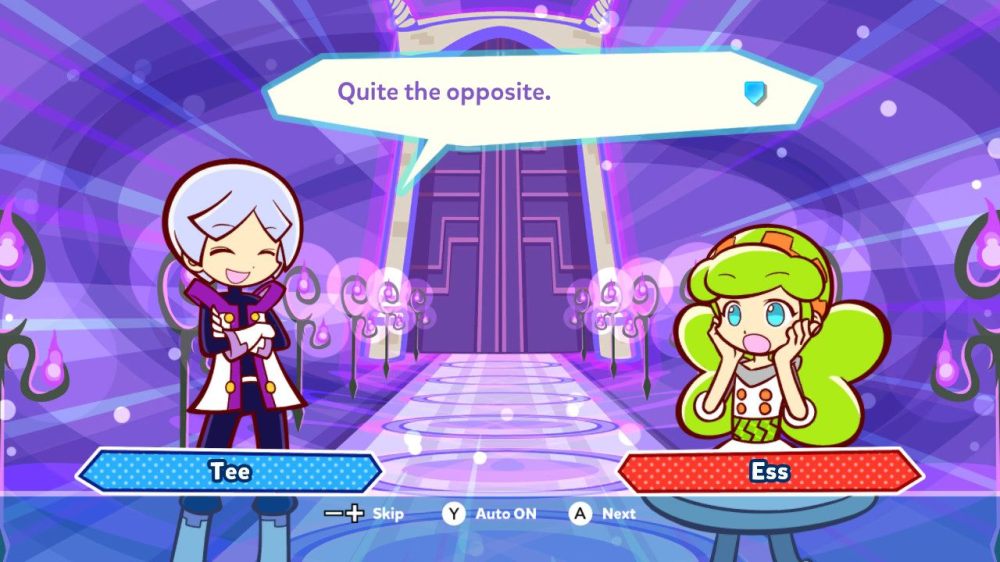 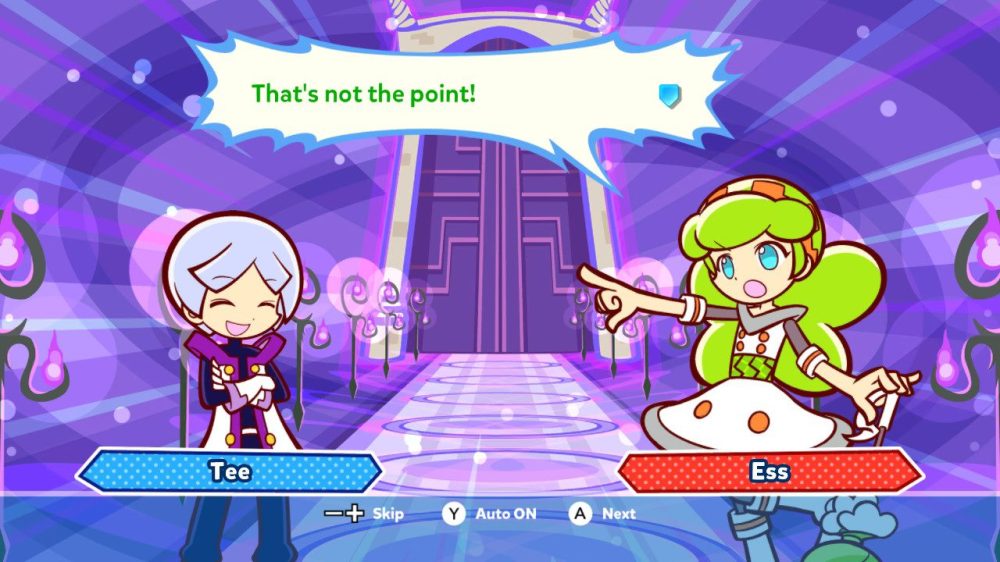 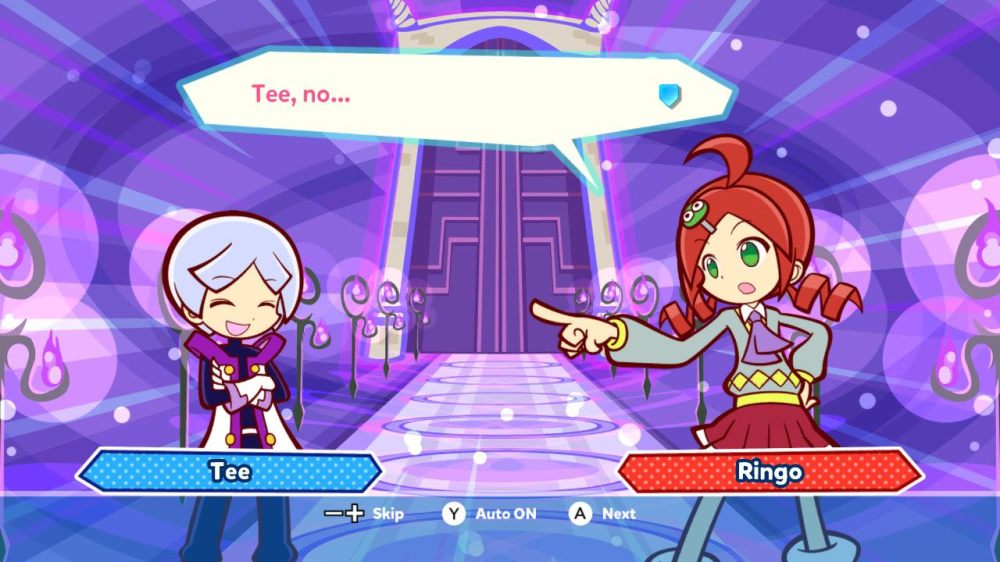 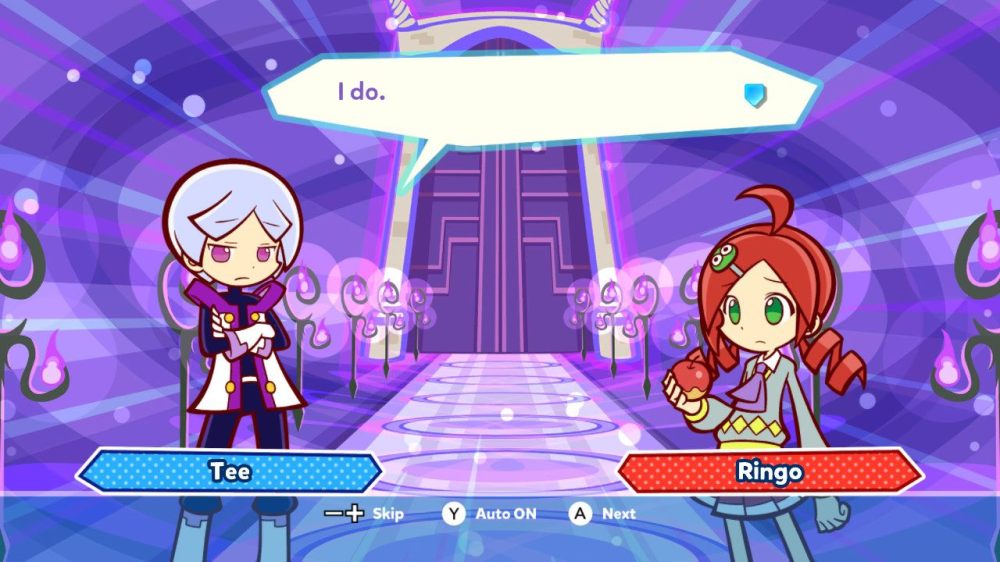 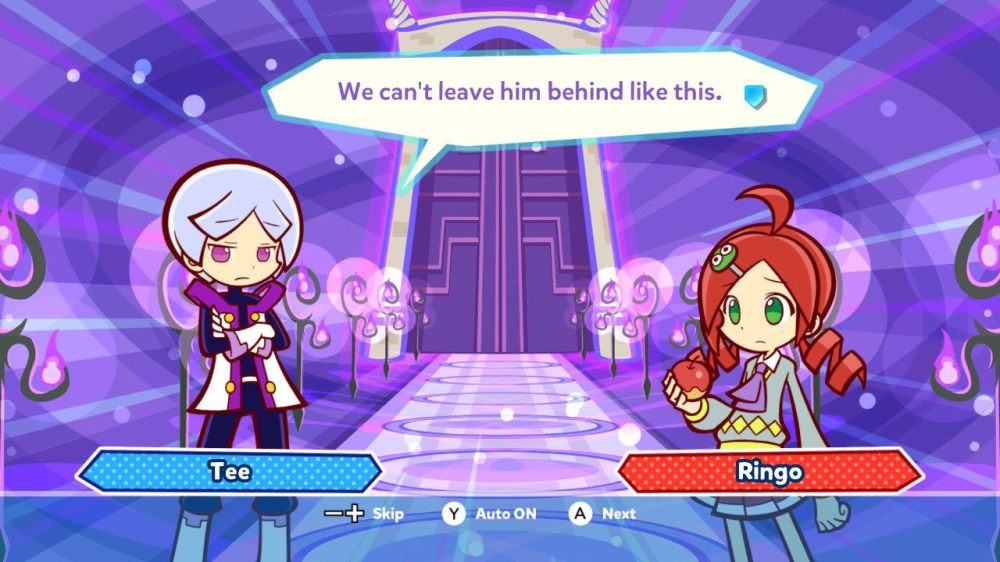 So okay, Tee wants to take Ex’s place to remove Ex’s loneliness… but his last line has me confused. How does this help Ess? Ex and Ess are two different characters, so I wonder if this is a typo? If not, then they are withholding more information from the player, and they do not answer that question for the rest of this game! Let’s look at the rest of this scene: 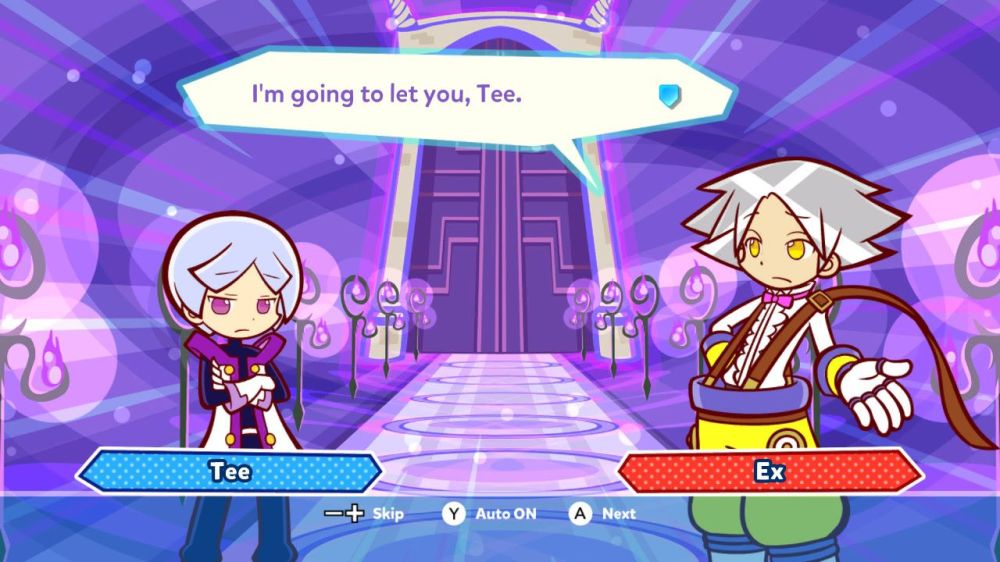 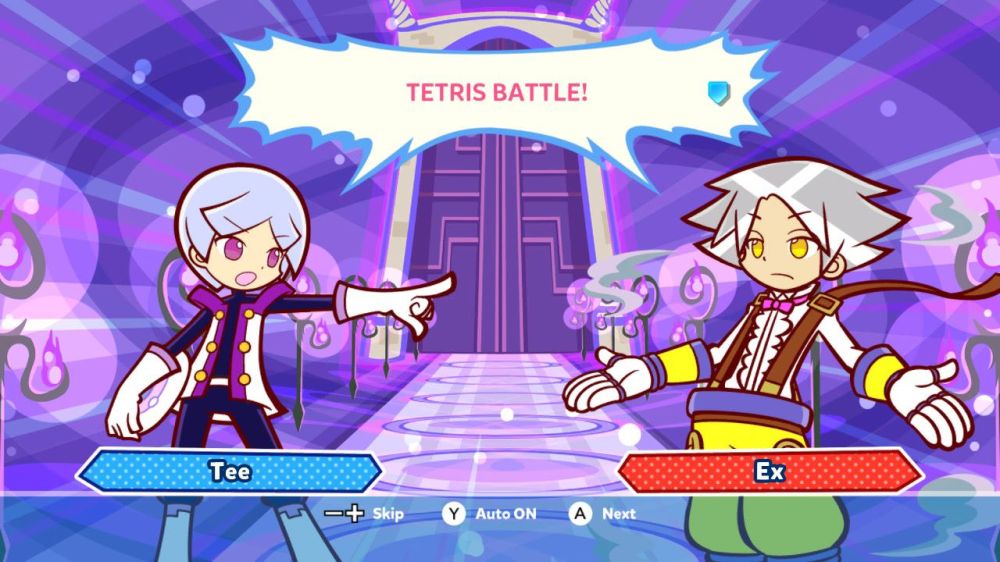 So wait, Ex was holding back in the last scene? Did he want to lose, or something? Also, why do they need to battle? Ex wants to switch places already. It seems that Tee wants to see Ex’s full power, or something, but is it really necessary? The game then moves onto more gameplay, and the scene ends here.

So this scene was kind of basic in its presentation, so it gets the job done, but could be better. They really need to wrap up the loose ends too, not add more of them…but I guess the writers of this comedic, nonsense game didn’t care about that.

So now we have only one episode left, and it will feature two scenes in one, as Puyo Puyo Tetris comes to a close. It has been quite a journey critiquing this game’s story, so look forward to the finale next week!

And that wraps up this episode of critiquing Puyo Puyo Tetris’s story mode. What did you make of this scene? Were there any good or bad parts that I missed? What about that comment that Tee said it was for Ess’s sake, have any insights on that line? Let me know in the comments below! If you enjoyed this analysis, then click that like button and share on social media! To keep up with That’s All Games you can subscribe via email or WordPress. Until next time, have fun gaming!