Hello, and welcome to my newest series of articles, Game Story Case Studies, where I critique the writing and storytelling from video games, both good and bad. To be clear, when I say writing, I will not only include anything written on screen in a video game, but also the visual storytelling, and spoken dialogue included in the video games critiqued in these articles. All of those things can be considered writing, and depending on the form the game takes, will be included in these articles.

I will include games that stood out the most in my experience, and that I still have access to. While I am open to suggestions in the comments section below, I will have to acquire any games suggested before I can write articles on them. In that regard, if I don’t own the game in question, please be patient, and I may eventually cover it in the future.

Today’s article will be on Puyo Puyo Tetris’s story mode. I was visiting a friend recently, and as we were playing the game, I mentioned how bad I thought the story mode was. We took a look at some early game cut scenes, and she not only agreed with me, but we ended up skipping part of the scene in question. When I first played the game, I started speeding up the dialogue near the end of act 1, and not long after act 2, started skipping all cut scenes in story mode (I did finish the story up to the credits, and only recently found post story content that I have yet to look into). The story of Puyo Puyo Tetris is a train wreck, so let’s get started and delve into why (thankfully, the game play is fantastic). I will also try to propose solutions in the process.

Let’s look at an early scene:

This is only the third sentence in the opening. The first two mention how peaceful the day is. It isn’t great to see Ringo repeating the notion with very obvious foreshadowing. 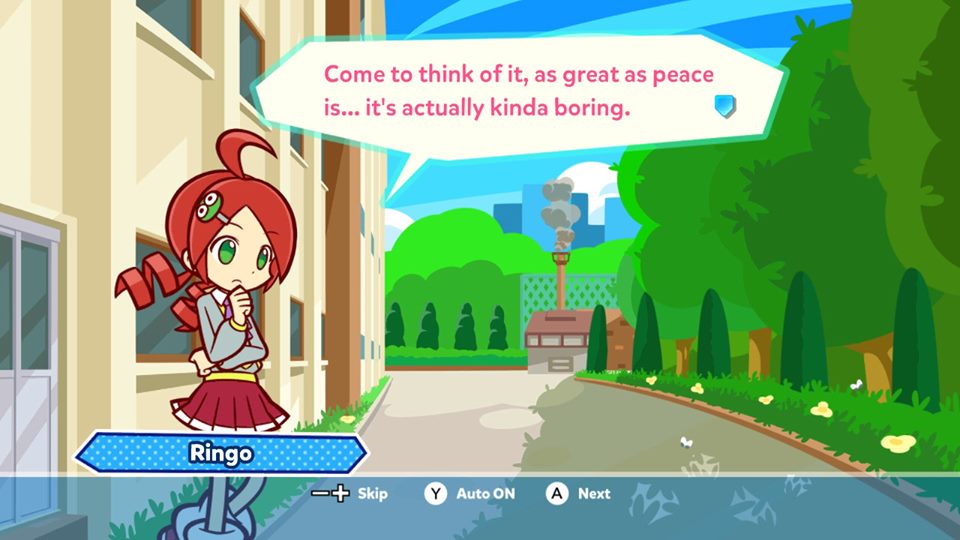 The change in mood here is a little odd. Yes, peace is boring, but it is better than negative emotions…also, are they foreshadowing again already?

And in between these two lines, she wants something exciting to happen, such as something that NEVER happens in real life, such as friends warping out of nowhere. Who thinks like that? Addtionally, there is no context for newcomers here…(does this happen in other Puyo Puyo games? Let me know in the comments!) 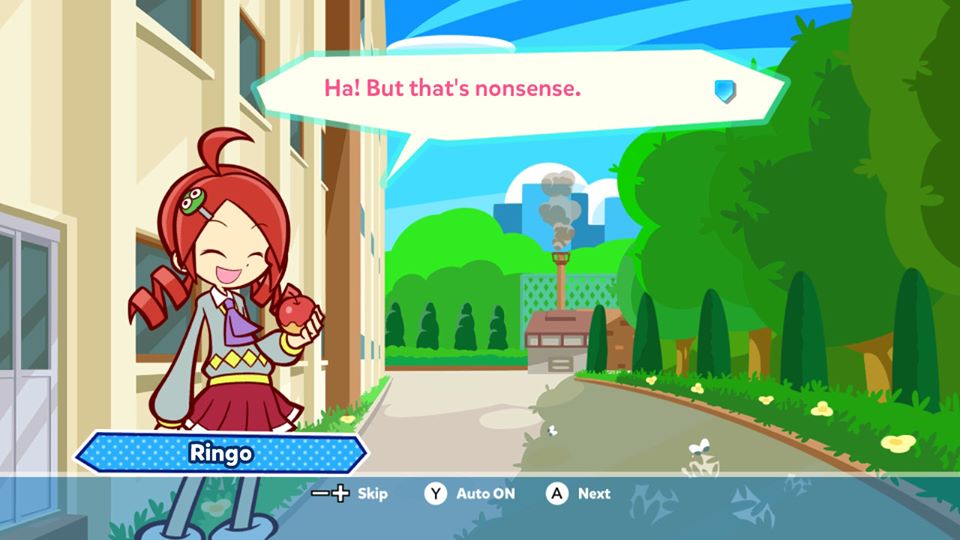 Yes, Ringo it is. Guess what happens next?

After denying that this wouldn’t happen, it does. Also, they aren’t showing this sort of absurd action as she says it, making it harder to believe.

That is a good question. It looks like they are aiming for self aware humor, but it isn’t working!

After some small talk, she guesses how this works, after not knowing what happened. Also, that is a strange thing for any type of a “battle” to do, even in the realm of fantasy writing and video games.

Wait, they are familiar with this process, but don’t know who, or what does it, or how?

After more small talk, we have this gem. Is the Puyo Puyo universe this weird? I also have a fairly high tolerance for weird, and this is a bit much. 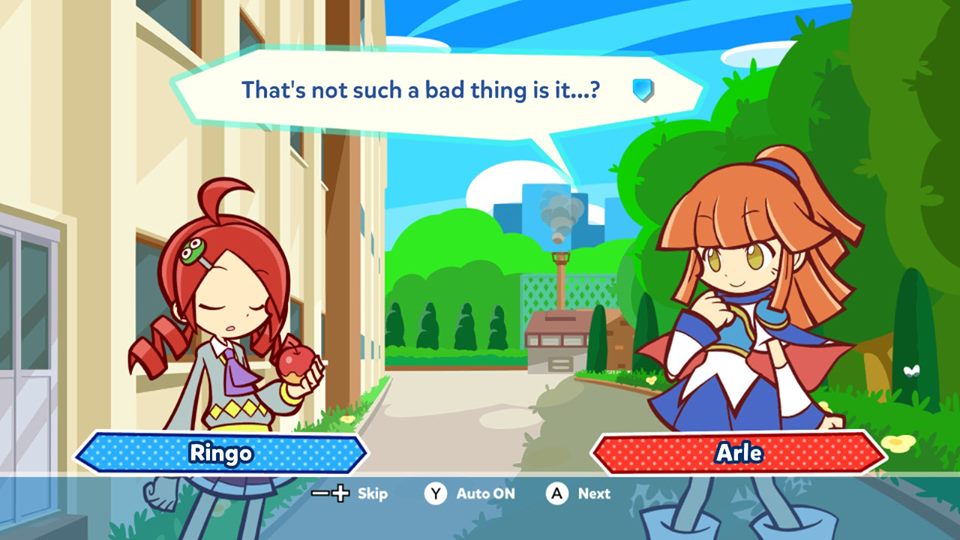 After Ringo mentions not knowing where they’d go from playing Puyo Puyo, Arle here suggests that isn’t bad? While I can appreciate wanting to travel, this sounds incredibly dangerous!

After discussing how fun it is to battle and how great it is that they got to visit with each other, we have more obvious foreshadowing here…

Really? Too much foreshadowing. I think this is the fourth case in the opening, and the game play hasn’t started yet! 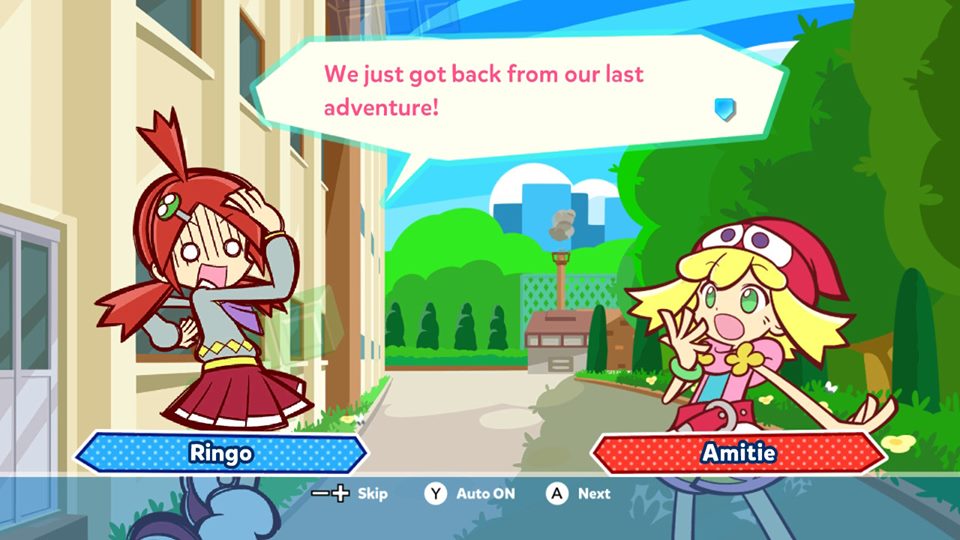 After saying how fun this would be (are they crazy? Immature?) tetris blocks start falling from this sky. Also, they just got back? How often does this happen?!

After freaking out over the tetris blocks, they start explaining Tetris. Tetris is so abstract, that explaining it isn’t a good idea.

Yup, they are explaining tetris, in more detail than they need to. A tutorial would have been better.

Again, why does this happen?

And suddenly, we are in a different scene, in space, with new characters. Let me guess, they are about to get space-time ripples. 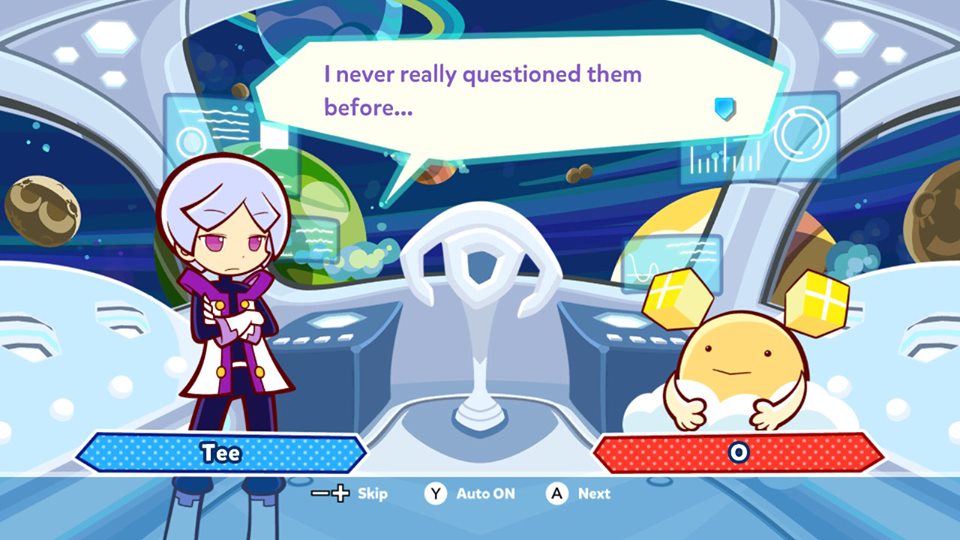 So this new character, Tee is suddenly questioning reports that he makes regularly…

And like the other characters, he quickly changes his mind. Also, another use of the “it’s peaceful” idea. Makes you wonder why they make these reports…

Yes, what are the odds? There seem to be too many coincidences in this game, and this is just the intro!

Well that was a lot of lines to cover in the intro scene alone! There are a few glaring problems here:

There is a need for some solutions here, but this game has a lot of long scenes to sift through. As such, this game will get multiple parts in this series to cover all the writing issues I find. Look forward to part 2 of Puyo Puyo Tetris soon!

And that was just the opening scene of Puyo Puyo Tetris’s story mode. There is more to come very soon. Do you like this content? Want to see more? let me know in the comments below! You can also give this article a like, or subscribe via email to stay on top of That’s All Games. Until next time, have fun gaming!