It is that time again to cover another scene in Puyo Puyo Tetris’ story. As I critique this game’s story, I will skip some scenes to cover the most noteworthy moments. I will continue to analyze what works well, and what doesn’t. This is part 9 of this series, with more to come. This scene will directly follow the previous article on this subject.

Recap: After fighting certain possessed characters intent on merging the Puyo Puyo and Tetris worlds, the SS Tetra is almost fully repaired. The crew sets off to find some crucial parts in the sky. 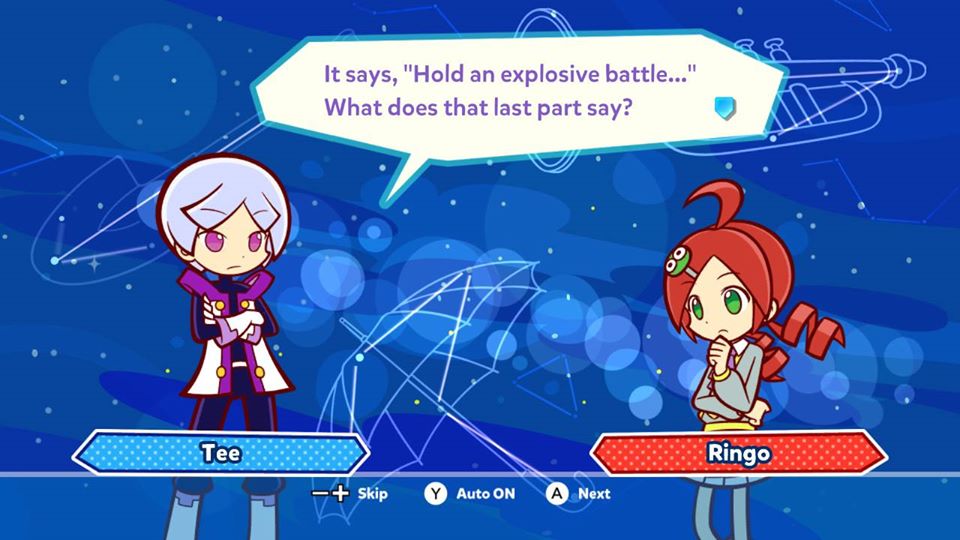 Alright, so the setup is that they are looking for ship parts. Why would a battle with the Tetris King lead to finding a ship part?

And again, Ringo points out the obvious question that in this case, doesn’t get answered. 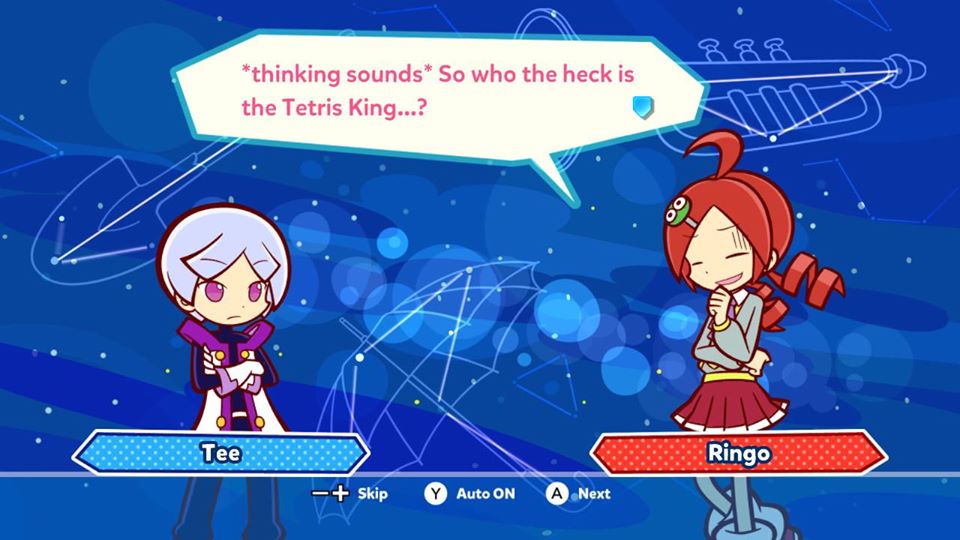 Both are good questions, but these actually do get answered. 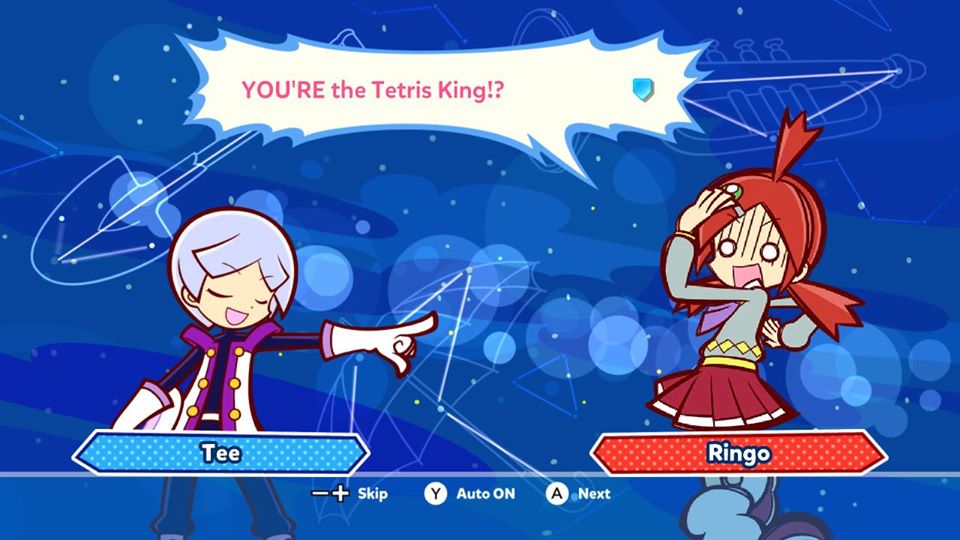 That is an interesting development. I’m not sure what that title of Tetris King means (presumably the best Tetris player). It is also odd that a main character has that title already. The game then cuts to gameplay. 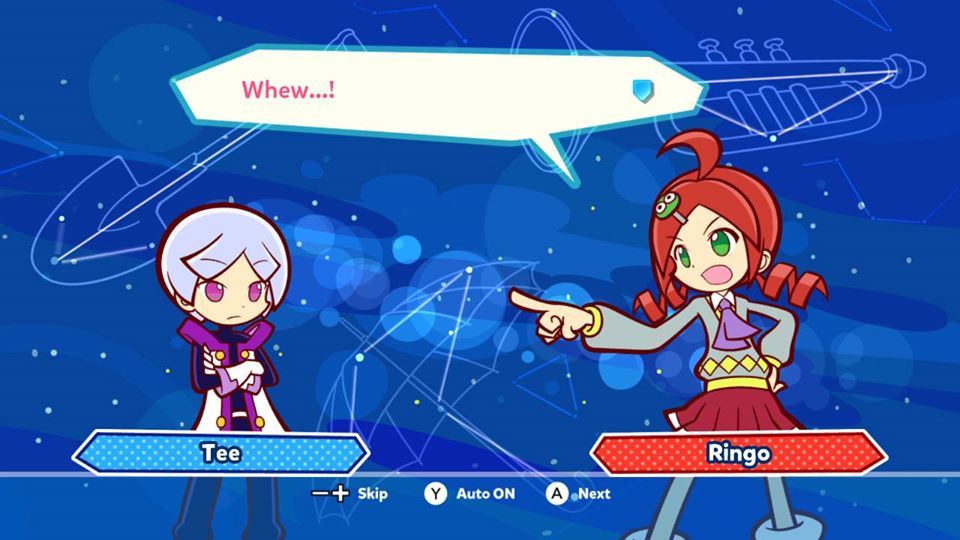 First, didn’t these two characters battle in the beginning of the game? Why didn’t a ship part appear then? Did they have to do so in the constellation zone? There is a lot more that doesn’t make sense in this game than a bland title here. 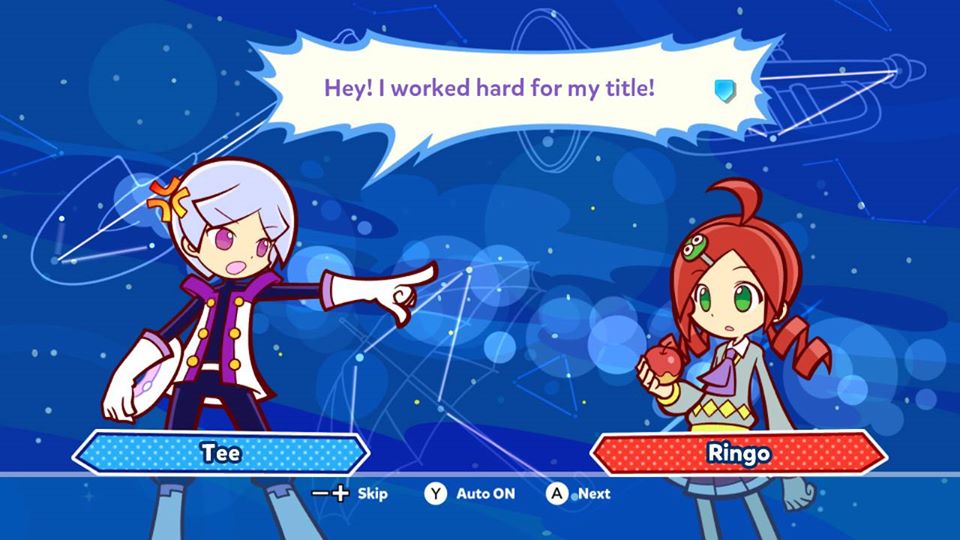 While that is a good point, but I want to hear more about the Tetris King. While this exchange sounds like mere backstory, it is actually very important info for the end of the game. Oddly, the scene ends here. For once, this game has a brief scene, but it actually could have expanded on the new idea they present to the player. They actually mess up the length in the opposite way in this scene. Most of the time, the scenes are too long and nonsensical due to too much info at once. In this case, this scene doesn’t present enough information. The Tetris King concept actually sounds interesting enough to expand on it a little here, but they don’t. This game’s story is messed up at almost every turn!

And that is all I have to add to this scene for now. But what about you? What do you like or dislike about this scene? Did I miss a point I should have critiqued here? Are you enjoying this kind of content? Let me know in the comments below! If you liked this article, click that like button to show your support! You may also subscribe via email to keep up with That’s All Games. Until next time, have fun gaming!