It is time for more Puyo Puyo Tetris story analysis. We are at the end of yet another act, and are continuing where the previous scene ended. In the future, some less relevant scenes may be skipped, but for now, every scene will be shown, including the next scene. Let’s get started.

Recap: Arle, Ringo, Tee, and friends are trying to find the Dark Prince for answers to the merging of the Puyo Puyo and Tetris worlds. This scene starts with them catching up with him. Here’s how the scene begins. 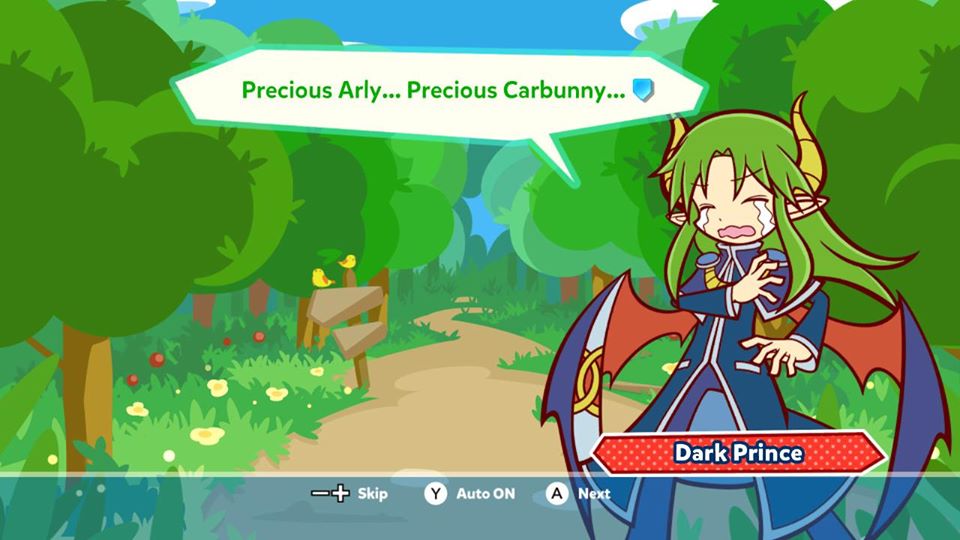 Since they aren’t animating it, it is a little unclear that the Dark Prince is doing the “pulling of flower petals” trope that lovesick people often do in some stories. Instead of saying “she loves me, she loves me not”, he says “I forgive them, I forgive them not”. Thankfully, the rest of the scene does clear this up.

It looks like Ringo can’t tell Tee what the issue is. This is odd, as she tends to spell out the obvious in most situations. We’ll see soon why Tee interrogating the Dark Prince could be an issue. 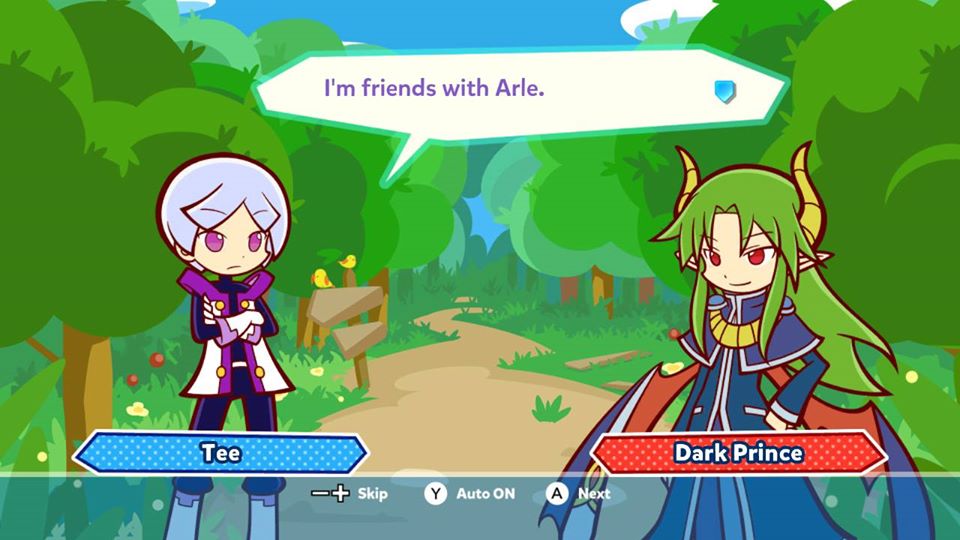 I guess the issue with talking to the Dark Prince right now is that he doesn’t want to hear Arle’s name. Now let’s see how that plays out. 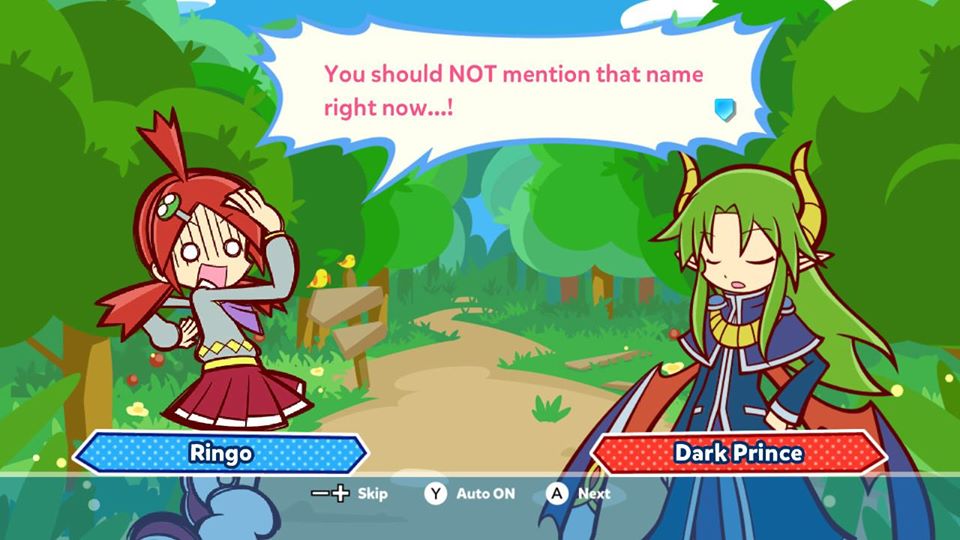 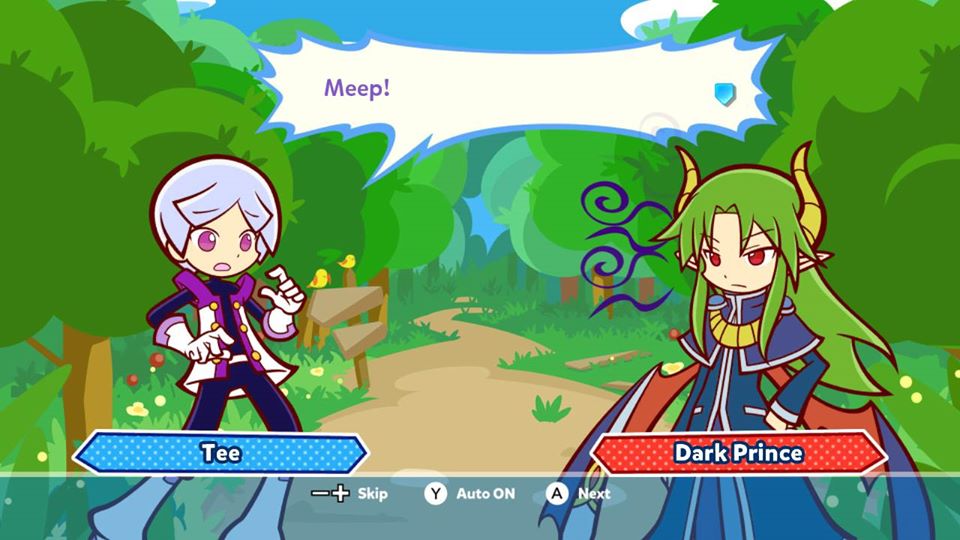 This story has used the sound effect of “meep” quite a lot. While its meaning is still clear in context, it isn’t used that commonly in storytelling.

Well the game now cuts to gameplay. If you win, you get to see the rest of this scene.

There’s not much more to add or critique to these lines, as they speak for themselves. Let’s keep going. 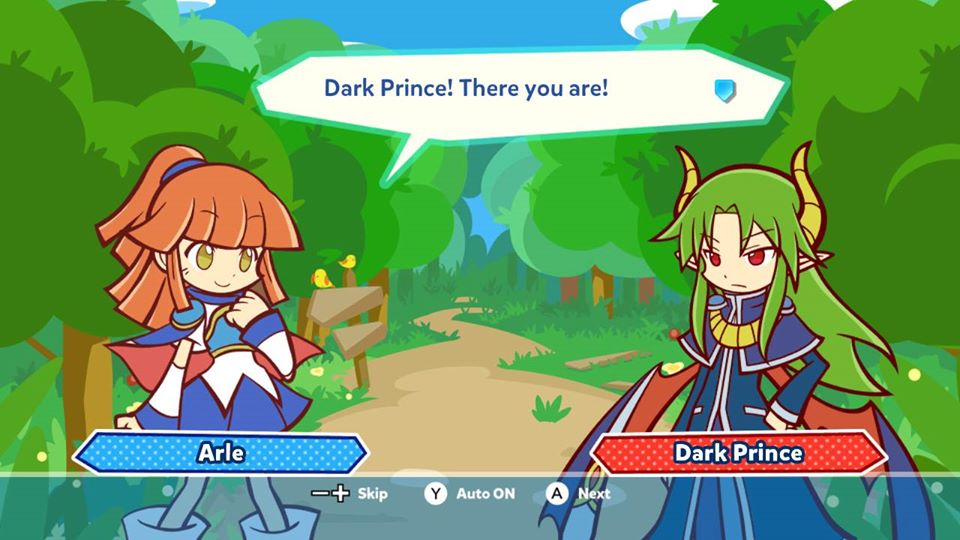 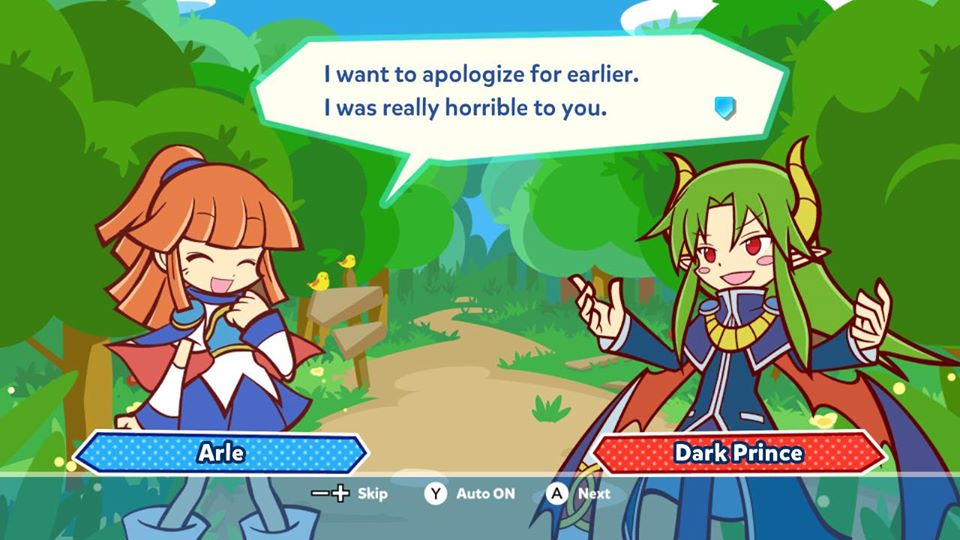 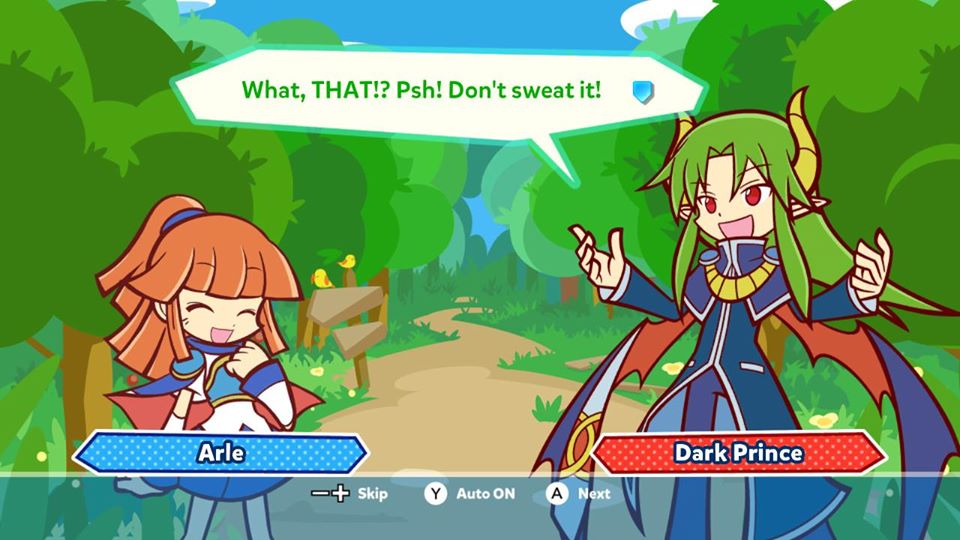 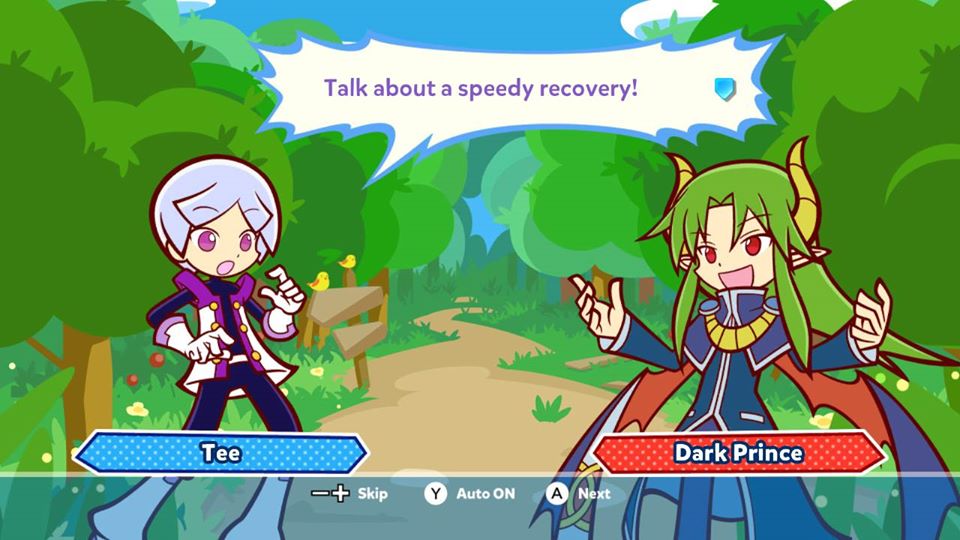 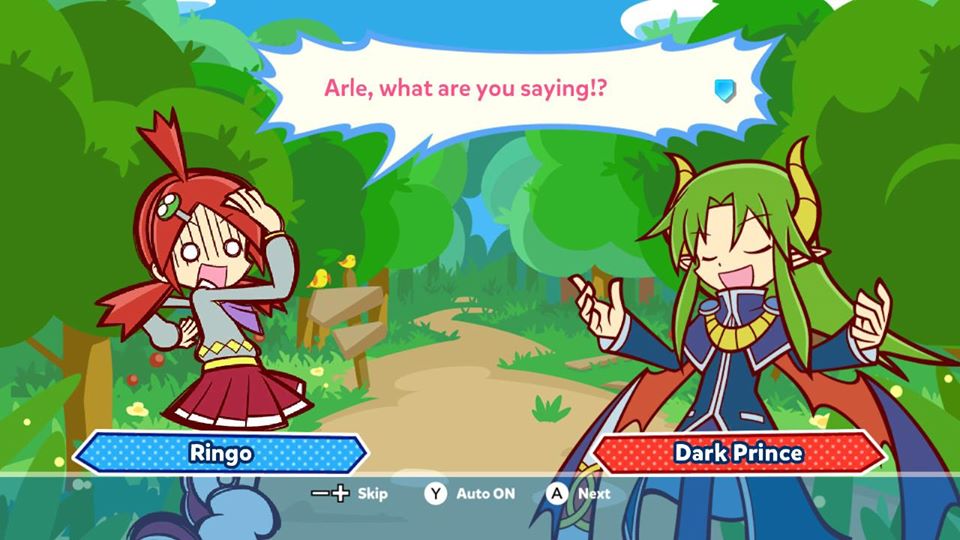 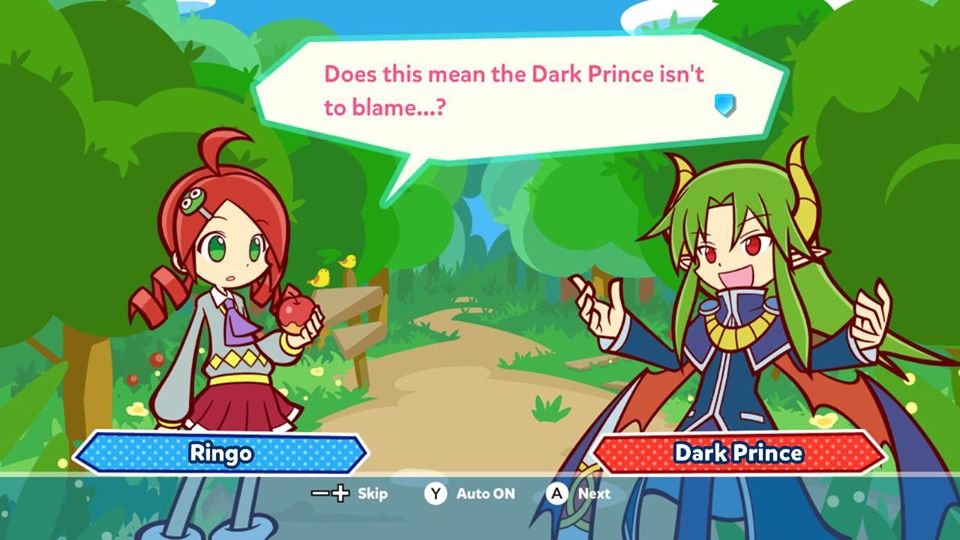 We already know from a previous scene that the Dark Prince isn’t to blame. Let’s see if we get some answers. This batch of dialogue works surprisingly well, considering how nonsensical this game’s story has been. At least they got this part right. 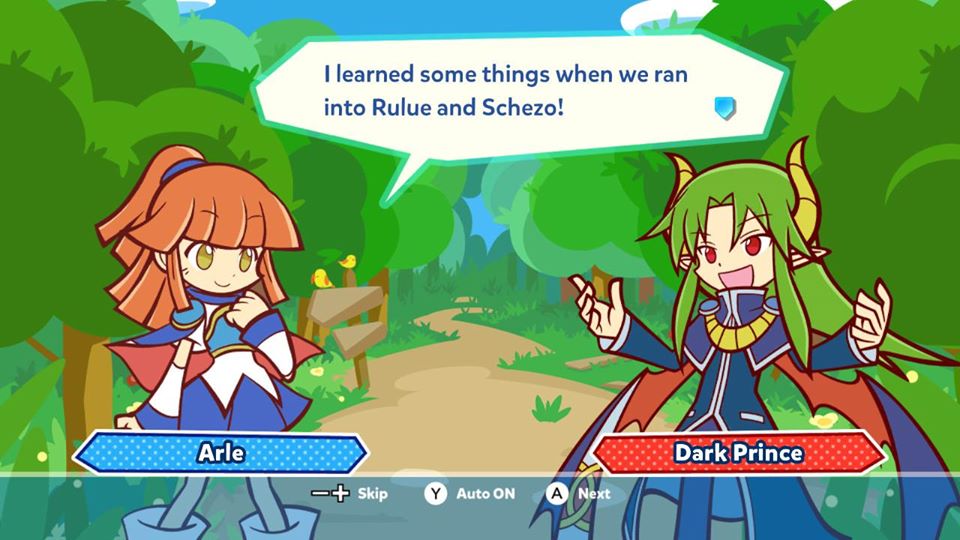 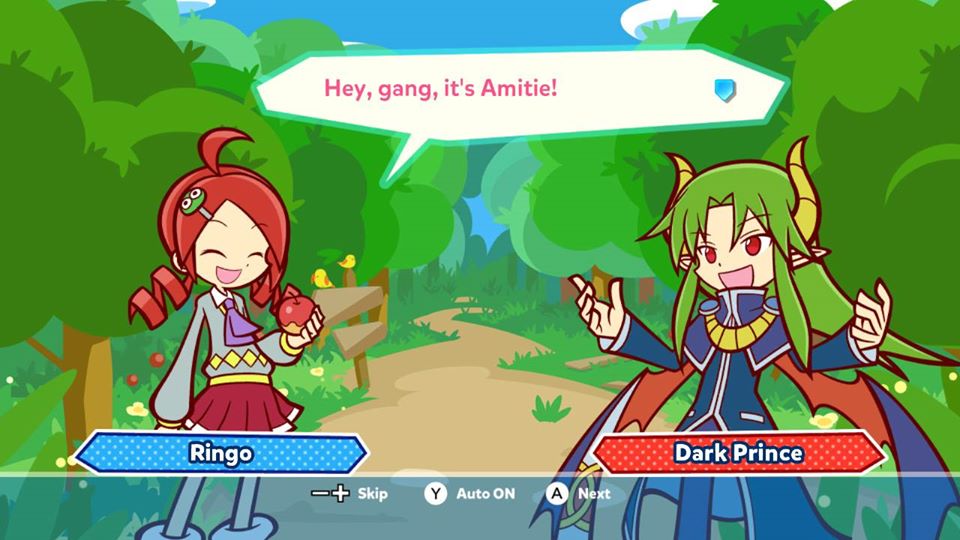 So this scene is held up by having everyone regroup. It is almost annoying how happy go lucky everyone is here too. 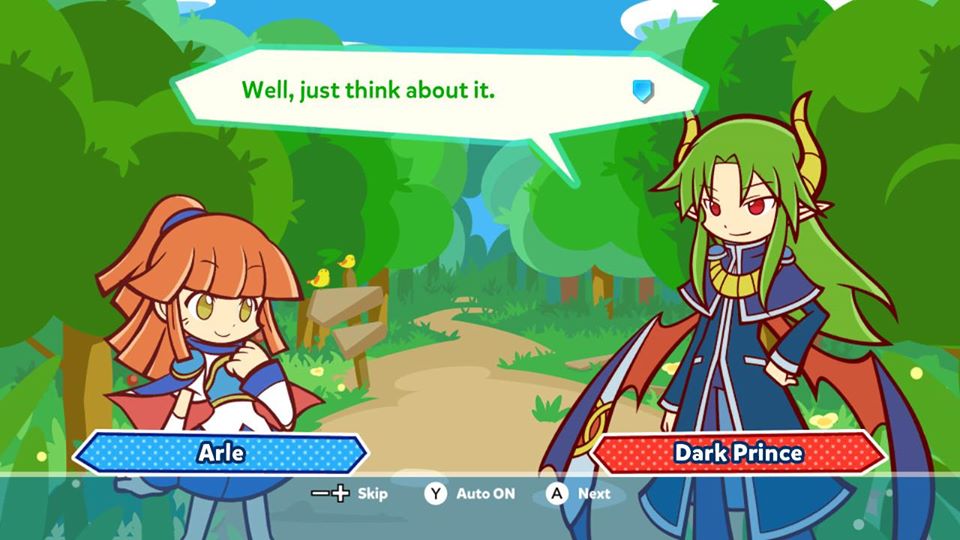 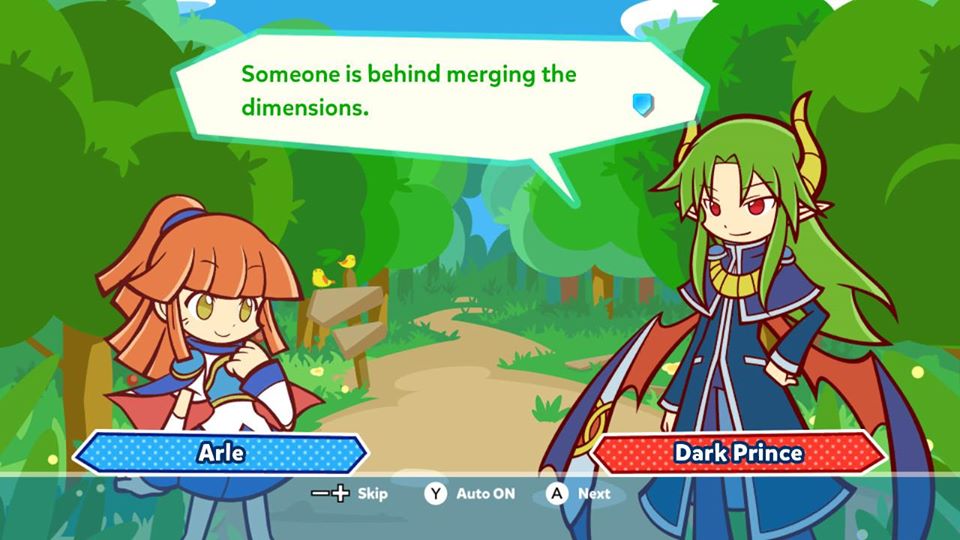 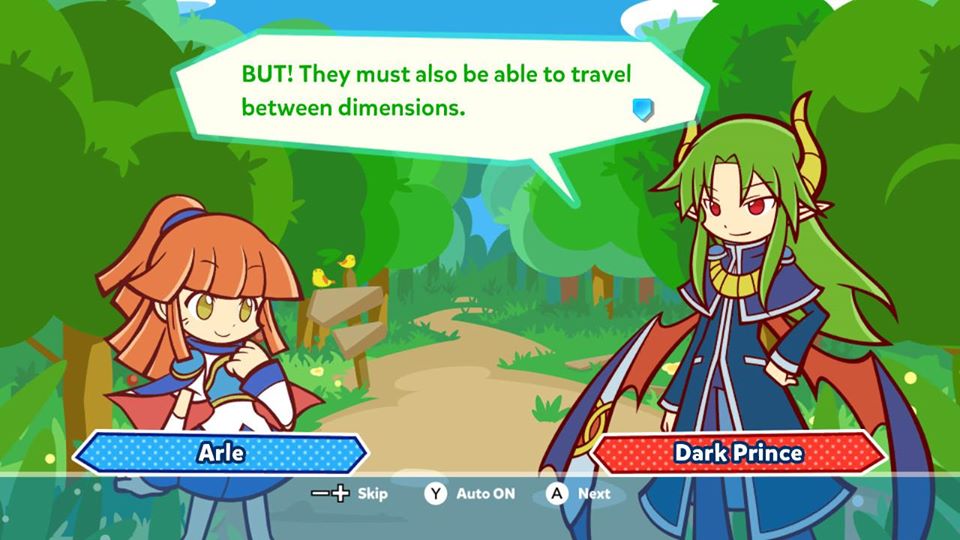 Okay, now it is the Dark Prince who’s pointing out the obvious. The only thing is, the player shouldn’t know who he’s talking about, especially if the player is new to the series. Incidentally, this character ends up being a new character, so no one viewing this scene would know that. There is also quite a bit of the game left before you find out who is responsible. 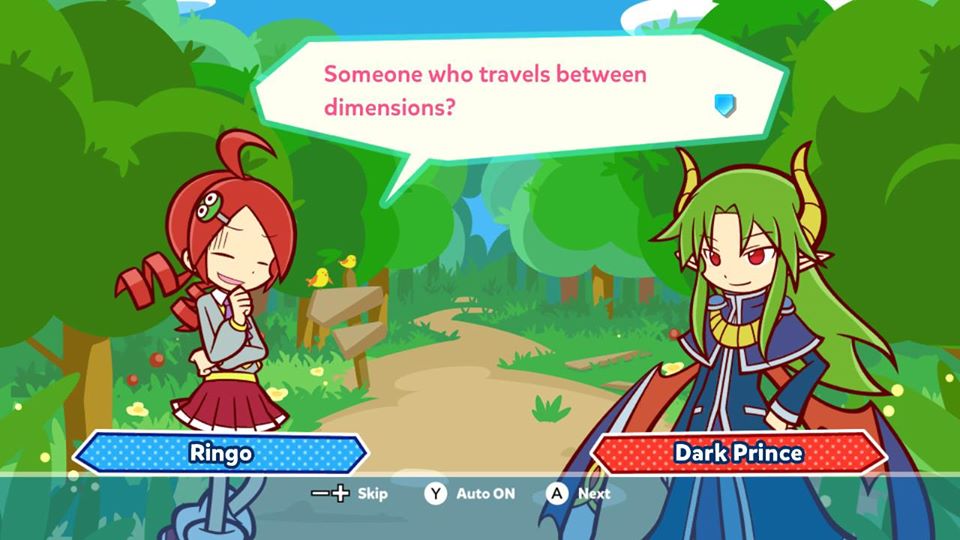 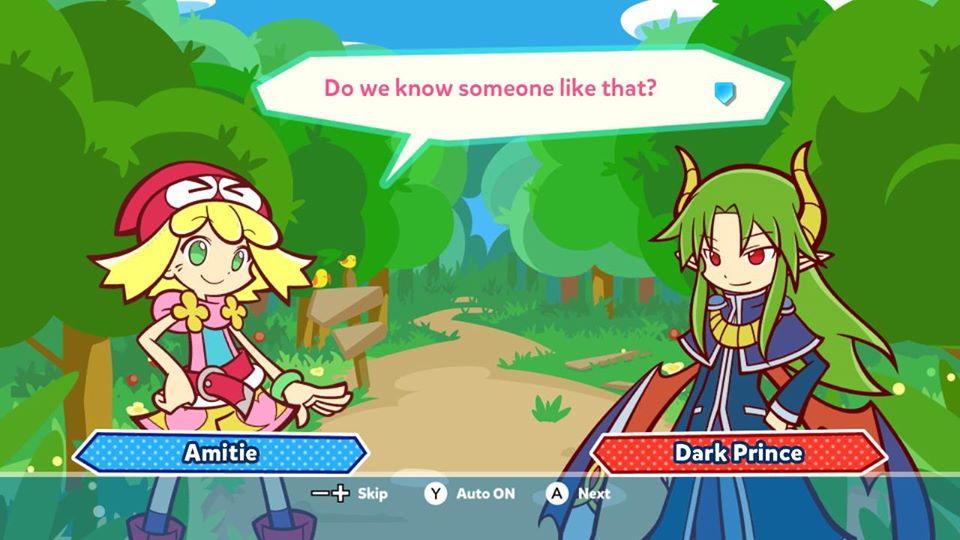 Apparently they sort of do, but he isn’t revealed until much later in the game. It would be nice for the Dark Prince to give a name here. 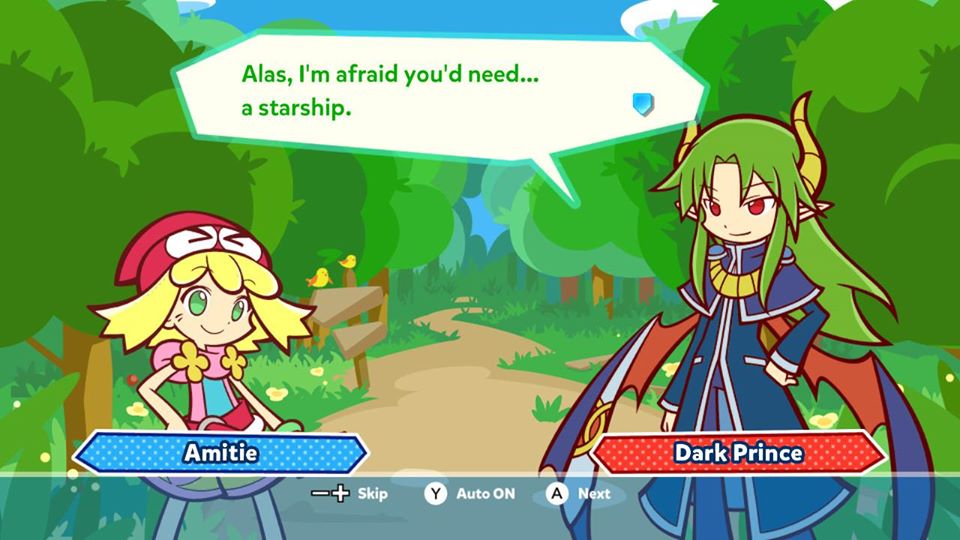 Hey, they have one of those, what luck! Or more accurately, it was kind of convenient for the Tetris themed characters have a spaceship to begin with. The writers made their jobs a little too easy. 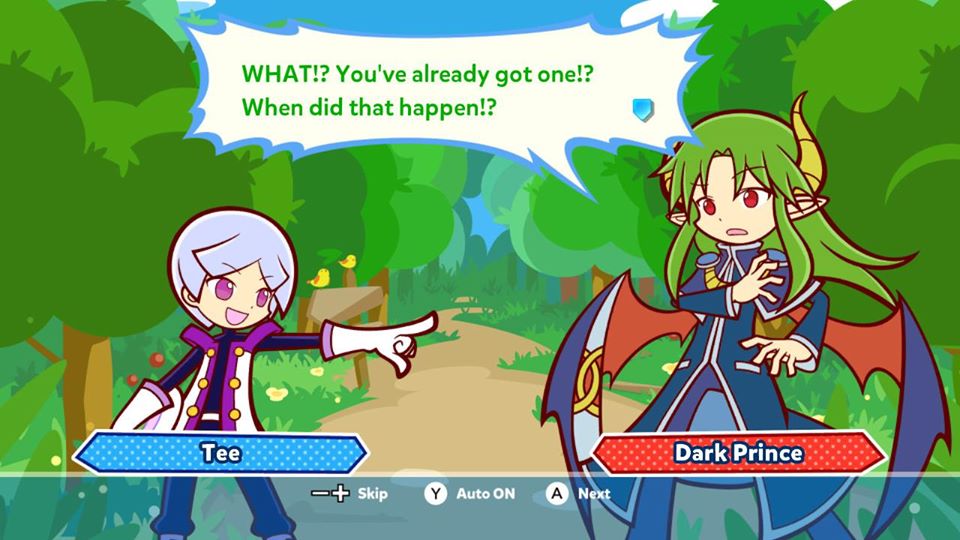 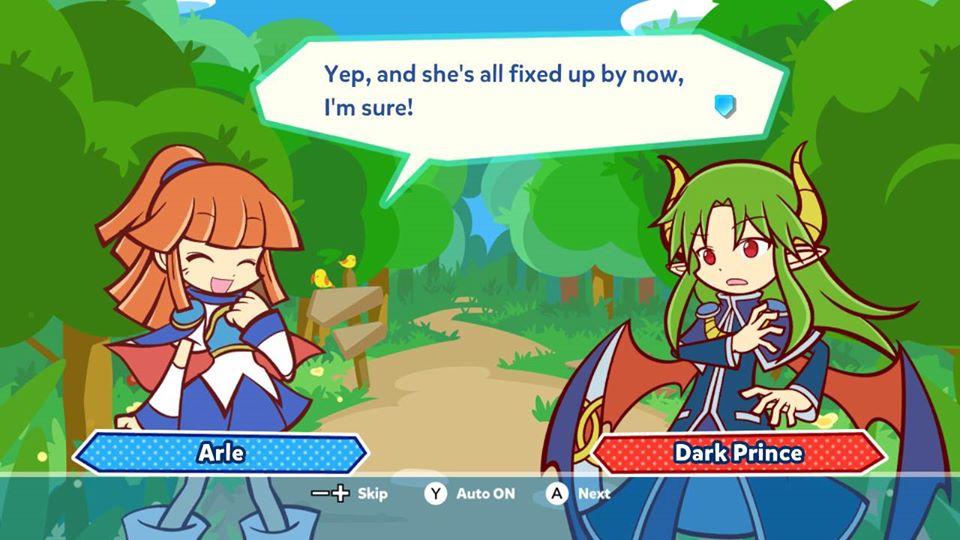 There really isn’t much to add to this portion of this scene.

And that is the end of the scene. I’m surprised they are trusting cleanup and rebuilding to the Dark Prince. The dynamic between all these characters are quite confusing. If the Dark Prince “loves” Arle, why does it seem he causes so much trouble for her? I get he may be evil, but from the looks of it, he’s not stupid either. He does appear to be emotional, though, so maybe he doesn’t think straight all the time… Well, we’ll be moving on to act 5 next, and hopefully there will be more answers soon (there aren’t, yet). Stay tuned!

And that was yet another scene analyzed from Puyo Puyo Tetris. What did you make of this scene? Was there something redeeming or terrible that I missed? Let me know in the comments below! If you liked this analysis, then click that like button and share it on social media. To keep up with That’s All Games, you can also subscribe via Email or WordPress. Until next time, have fun gaming!