When I first heard of Pokémon Unite, my first impression was that the game looked very similar to the popular MOBA (short for Multiplayer Online Battle Arena), League of Legends. I personally hadn’t played any MOBAs before, and had only watched a few sessions of League of Legends so I figured Pokémon Unite wouldn’t be my type of game. My expectations were sort of low going into this game. Is the final product better than I thought? Let’s find out in this review! 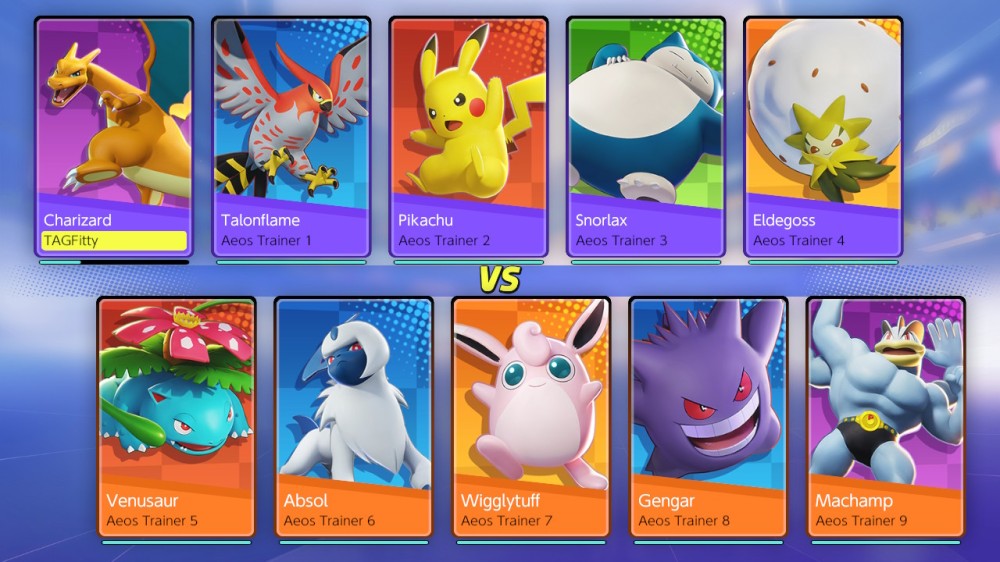 Pokémon Unite is a game where two teams of multiple players, usually 5 vs. 5 each play as a specific Pokémon and move around an arena in real time. They have to gather points (called aeos energy in this game) by defeating wild Pokémon, then use that energy to score in the opposing goals. Score enough goals and that goal will disappear, with the last goal being the only one to stay for the remainder of the match.  Whichever team scores the most at the end of 10 minutes wins.

You can also defeat an opposing player to make them drop their aeos energy as well. Thankfully, any player defeated will reappear after waiting a bit. Much of the strategy relies on scoring undefended goals or defeating opponents efficiently enough to score frequently. The game is compatible with certain headsets, so you can communicate with the other players who might be using them, which is a welcome change for an online Switch game. That being said, the game doesn’t show score during a match, instead it simply says if you are ahead or struggling at certain intervals. 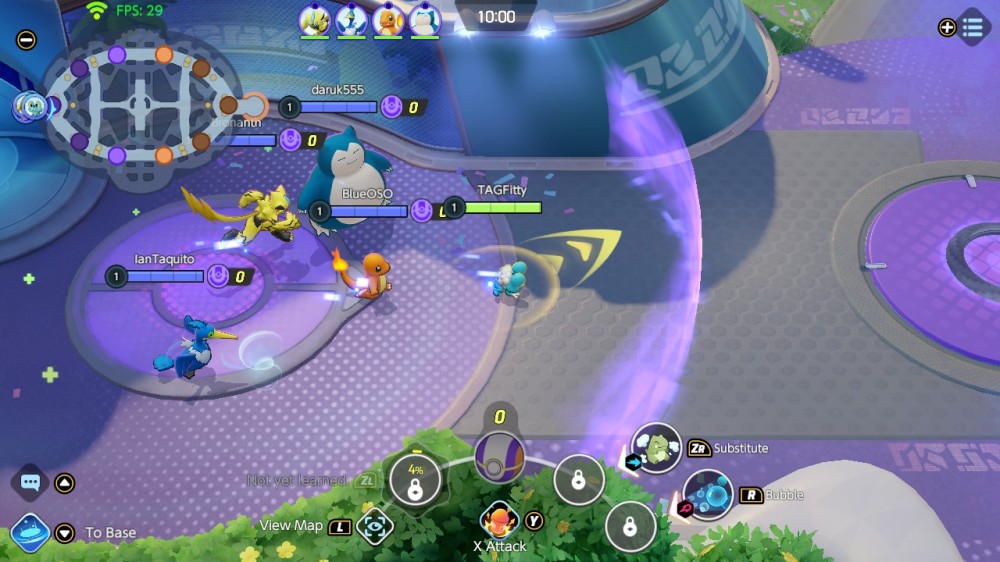 Much of the time, I find that the games can be one sided, where some players aren’t coordinated with each other, someone isn’t playing, or someone isn’t scoring on one side. On the other end of that spectrum, some players may have enhanced their customizable items to a high enough level to be able to overwhelm a team that hasn’t done that yet. This leads into another issue with the game, it is a free to play game.

Like many free to play games, you have to earn a lot of in-game currency to buy new playable Pokémon, items, item enhancers, and cosmetic items. This process is usually slow, and the game features four types of currency, though there are a variety of tasks and challenges that can speed this up a bit. There is one form of currency that you have to pay to earn, but thankfully the only items that require this currency are cosmetic options for your Pokémon. Incidentally, if you don’t have enough of one sort of currency, the game can convert between each type of currency, but the conversion rate is unclear to those who just started the game.

Ultimately, you don’t have to pay to get everything, and some items will be given for free if you accomplish certain tasks, but paying real money does speed up the process a lot. Be warned, one character could cost from $8 to $20, as could the cosmetic options for these Pokémon. Item enhancers can be paid for too, which can give paying players an edge if they can afford it, and can lead to the previously mentioned one sided matches.

Pokémon Unite is a game that will be continuously updated, and will feature a mobile version of the game very soon. The mobile and Switch versions can also play with each other, so that is also a nice touch. I stopped playing in order to write this review before the Pokémon Blissey was added to the game, while the Pokémon Blastoise will be added soon after this review goes up. This review covers the first 14 days that I played in the early portion of the game’s life cycle, so as time goes on, some parts of the review might not be relevant in the future.

During my time with the game, I noticed there wasn’t much variety in the gameplay. There’s one map for both the standard and ranked matches, and 3 maps with only one available at any given time for the (unranked) quick battle option. As such, I lost interest after I gathered my 14 day welcome gifts. That being said, this game was reasonably fun, and exceeded my expectations while I played it. I can see some players getting hooked on this game, both for players that play for free or that pay to speed things up. While this game wasn’t for me, it definitely is worth a look if you are curious about it.

This game may not have held my interest for very long, but I could see players getting hooked on Pokémon Unite. The game could be a 7-8.5 based on how well it holds a player’s attention. How often you play with a good team or against a paying team might influence how good of a time you might have, which is a given byproduct of playing an online game. The game still exceeded my expectations, and I might return to this game at a later date.

Those are my thoughts on Pokémon Unite. What did you think of this game? What is your favorite Pokémon to play as? What do you hope gets added to this game? Let me know all this and why in the comments section below! If you enjoyed this review, then click that like button and share on social media. To keep up with That’s All Games, you may subscribe via email or WordPress. Until next time, have fun gaming!