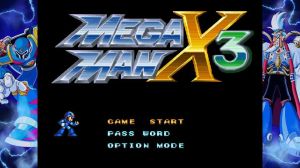 Like Mega Man X2, not much was added to the Mega Man X formula. There are a few new types of power-ups (as well as more of them), and you can play as Zero, though the game won’t let you use him in some locations, such as when fighting bosses and sub-bosses.

Most notable about Mega Man X3 is that this game is much harder, possibly the hardest Mega Man game out there. There are two things that make this game difficult enough to hinder the experience:

That being said, Mega Man X3 does have the coolest assortment of collectible power-ups, and Mega Man X can become stronger in this game than in any other. Finding most of these power-ups requires fewer awkward jumps than in the previous two games, although the best couple of power-ups have quite a few odd requirements that aren’t obvious while playing the game.

Mega Man X3 is still fun if you are looking for more Mega Man X action. The difficulty spikes throughout the game can dampen the fun, even if you are very familiar with this game or other Mega Man games, so some caution is needed when picking up this game on its own.

Some players may like Mega Man X3 more than others based on difficulty tolerance and how much you may like the Mega Man X formula. This game could be a 7.3 to an 8.8 according to these factors.

Go to page 4 for Mega Man X4 and bonus features.