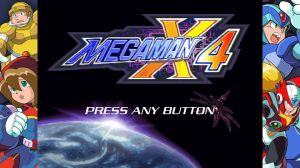 Okay, last game to cover here. Mega Man X4 was originally on the PlayStation. As such, the new hardware lead to new capabilities, such as enhanced graphics, new music, and voice acting. Unfortunately, the voice acting is pretty bad here, it is enough to take me out of the experience whenever X’s health gets low and he says “time to get serious” in a Loony Tunes style voice.

That being said, this game does have some upgrades, including a save system, and the option to play the game as X or Zero. Of note, X relies on long range attacks and can be upgraded more, while Zero fights at short range and struggles more against bosses as a result.

Like other Mega Man X games, this game does have some awkwardly placed power-ups, and it feels like there more of these poorly place power-ups than in X2. Thankfully, this game makes better use of checkpoints, so if you lose all lives you can start at the midway point of the stage instead of the beginning of the stage. In some cases, you can start right before you can attempt to get some upgrades, but that there are more awkwardly placed upgrades limits how good of a decision this was.

Much of Mega Man X4 feels “off” to me. While the graphical upgrade was the least offensive of these changes, when combined with the stylistic change to the music and bad voice acting, this game feels more like a good imitator instead of an actual Mega Man X game. The gameplay is still good, but everything else feels out of place after playing Mega Man X1 through Mega Man X3.

Much of this score is based on my own personal preferences, as the stylistic shifts are jarring after playing X1-X3, making this game feel like the worst game offered in this particular collection (note that most of the games in Legacy Collection 2 are worse, from what I have played (X5 and X6) and heard (X7 was supposedly very bad)).

Before I wrap up and rate the entire collection, let’s list the bonus content included exclusively in this collection.

There is one bonus mode called X Challenge vol. 1:

While I found this mode a neat addition, the end result was a series of chaotic battles. I might explore this mode more at a later date, but couldn’t see myself playing this mode frequently. It is possible that after playing all of the games included here, you might be a little burned out from all of these similar games. I really felt like I needed a break from these games after completing X Challenge vol. 1, but I can definitely see myself replaying the first 3 Mega Man X games sometime later whenever I might be a little bored and I want to kill some time. Who knows, I might even give X Challenge another go at a higher difficulty, if only out of curiosity.

Verdict of the entire collection:

This is roughly an average of all the games in the collection. Some of these games are better than others, but if you don’t have any version of these games, it is great to have them all in one place. If you own most of these games already, then this collection might be a little redundant.

And that was my take on Mega Man X Legacy Collection. What did you make of this collection of games? Which game was your favorite, and why? What did you think of X Challenge vol. 1? Let me know in the comments below! If you enjoyed this review, then give it a like and share it on social media. You can keep up with That’s All Games by subscribing via email or through WordPress. Until next time, have fun gaming!