Many popular games are platformers, especially among classic video games. In platformers, be they 2D or 3D, a character navigates a world that involves a large amount of jumping. These games are called platformers due to the frequent use of “platforms” that the player character needs to jump to or from to get from one place to another. Today, I will be looking at the many pieces that make up platforming video games, in order to generate discussion and get those creative juices flowing for game designers or aspiring game designers. Also, it can be fun just to think about how certain games work, in order to better understand them.

I will be making this a series of articles and break it up into some of the major parts that make up a platforming game, and will include some of the likely ingredients that fall under these categories. Of note, not all of the pieces mentioned in each category will show up in every platformer, and I might also miss a few pieces that may not show up as often in these games. Some ingredients can also appear in other genres of games. If I miss anything important, mention them in the comments section at the bottom of this article.

Here are the features I will discuss in this series of articles:

The only other feature that all playable characters have in platformers, is some way to track whether or not the player gets knocked out via some sort of health system. While this feature isn’t exclusive to platformers (in fact, almost all games have this feature, although the second and third Wario Land games don’t have this feature, and neither does Kirby’s Epic Yarn. In these examples, the player is invincible!), platformers have a tendency to handle health differently from most other games.

The standard way to handle health in most games is to include a health meter of sorts, that has a maximum value, and a value equal to zero that indicates either a game over, or a lost life. In some games, the health meter can become larger by finding a permanent health pickup (Metroid, Mega Man X), or through leveling up with experience points (this also boosts the character’s other traits most of the time, such as in certain Castlevania games). In many of these games there are health restoring items or locations to make a long game manageable.

However, many old platformers calculate health in other ways. Some have one hit knockouts from any damage (the original Donkey Kong, for example) and rely on lives to give the player extra attempts to complete the game. The Super Mario Bros. games are fairly unique, as a powerup adds an extra hit that Mario can take, in addition to changing his abilities. The Sonic the Hedgehog games are also unique, where if Sonic has at least one ring (the game’s main collectable), he can take a hit and survive. If he is hit, he loses all rings, but has a chance to get them back, as they are knocked away from him.

One last unique way health is handled in a platformer is in the Yoshi’s Island games. Here, if Yoshi is hit, baby Mario is knocked off of Yoshi’s back, and the player has a limited time to grab baby Mario, or else a life is lost. The timer slowly regenerates to the value of 10 once Yoshi gets Mario back, assuming the value is below 10 (this game features pickups that increase this value up to 30). Other than some hazards in these games, Yoshi is invincible.

There are multiple other traits that are optional for playable characters, most of which are not exclusive to platformers, but are interesting enough to mention them here. There are methods of attack other than jumping. These can be close ranged, long ranged, or any distance between these two options. They can sometimes be aimed in multiple directions (Metroid), or limited to the direction the character is facing (Mega Man, and most Castlevania games). In either case, the location and movement of enemies and destroyable obstacles need to match what the character can do. Some attacks have limited uses (such as ammunition in like the missiles in Metroid, or Mega Man’s boss weapons), although most games have an option that has limitless uses, but is less effective (both aforementioned games have weaker limitless use actions for attacking). In the case that there are limited uses for attacks, there are ways to replenish those uses, such as pickups that drop from enemies. 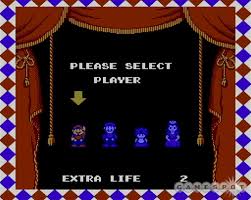 Another thing to consider is if there are multiple playable characters. These could just be a way to distinguish from player one and player two in multiplayer games, in which case the characters are functionally identical. In both single player games and multiplayer games, additional character options often have differing traits from one another. A classic example is Super Mario Bros. 2, where each of the four characters have different running speeds, grabbing speeds, and jumping abilities. Luckily, this game can be completed using any of these characters, although some areas are easier for certain characters over others.

The last feature of playable characters to mention is the ability to upgrade the character in some games. This can be done through in-game shops using collectible currency, or in some cases, through gaining experience points that lead to leveling up, and getting stronger across the board (more health, deal more damage, move faster, take less damage, etc.). Both methods can also add new actions to the character too. There could be collectables that are hidden and permanently enhance the character as well. This is a fun way to keep the game interesting, and sometimes make the game more challenging too. Often, this feature forces additional gameplay just to get strong enough for the next big opponent, and can be a chore if not handled properly.

And that wraps up most of what one needs to know about playable characters in platformer video games. Here’s a quick summary of what we have learned:

The Anatomy of Platformers, Part 2: Collectibles

The Anatomy of Platformers, Part 3: Enemies, Hazards, and Obstacles

Well, that covers part one of my discussion of what makes up a playable character, particularly in a platformer. What game mechanic do you like best about playable characters in platformers or any video game? Did I miss any potential traits of a playable character found in platformers? Let me know in the comments section below! If you liked this analysis, then click that like button and share on social media. To keep up with That’s All Games, you can subscribe via email or WordPress. Until next time, have fun gaming!

2 thoughts on “The Anatomy of Platformers, Part 1: Playable Characters”